The Order book for the start of the week indicates JMP are nett buyers of most stock, particularly BSP, KSL and STO

On the interest rate front, we saw a stable 364 day TBill auction averaging 4.02% with BPNG issuing 32mill more than the offer. No indication as yet on the next GIS auction but I do expect to see an auction in the 3rd week of October.

And for the alternatives 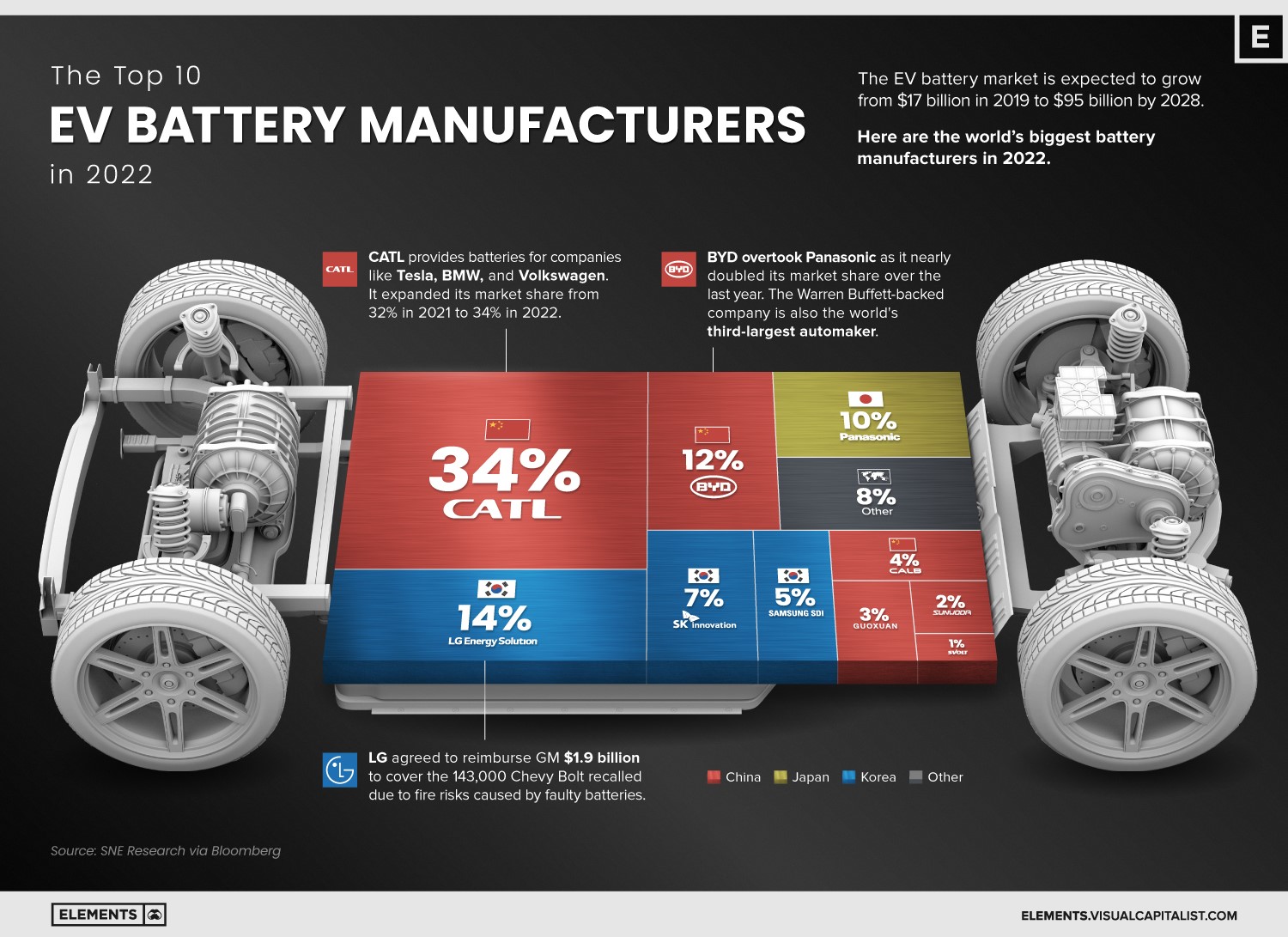 The global electric vehicle (EV) battery market is expected to grow from $17 billion to more than $95 billion between 2019 and 2028.

With increasing demand to decarbonize the transportation sector, companies producing the batteries that power EVs have seen substantial momentum.

Despite efforts from the United States and Europe to increase the domestic production of batteries, the market is still dominated by Asian suppliers.

The top 10 producers are all Asian companies.

The leading battery supplier, CATL, expanded its market share from 32% in 2021 to 34% in 2022. One-third of the world’s EV batteries come from the Chinese company. CATL provides lithium-ion batteries to Tesla, Peugeot, Hyundai, Honda, BMW, Toyota, Volkswagen, and Volvo.

BYD took the third spot from Panasonic as it nearly doubled its market share over the last year. The Warren Buffett-backed company is the world’s third-largest automaker by market cap, but it also produces batteries sold in markets around the world. Recent sales figures point to BYD overtaking LG Energy Solution in market share the coming months or years.

The Age of Battery Power

Electric vehicles are here to stay, while internal combustion engine (ICE) vehicles are set to fade away in the coming decades. Recently, General Motors announced that it aims to stop selling ICE vehicles by 2035, while Audi plans to stop producing such models by 2033.

Besides EVs, battery technology is essential for the energy transition, providing storage capacity for intermittent solar and wind generation.

As battery makers work to supply the EV transition’s increasing demand and improve energy density in their products, we can expect more interesting developments within this industry. 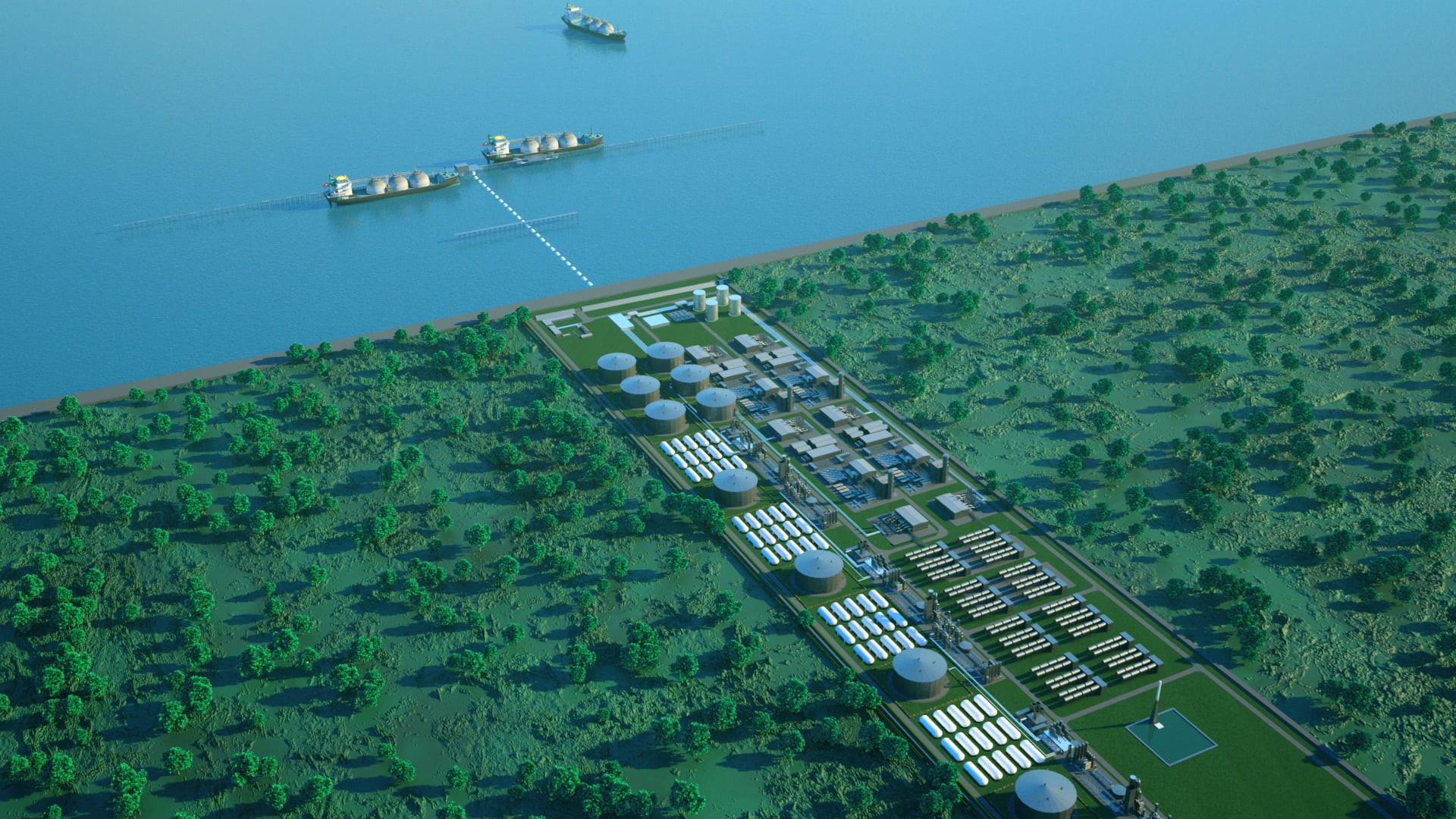 Australia’s Fortescue Future Industries, a unit of iron ore producer Fortescue Metals Group, has agreed to invest in Belgium-based TES, the developer of an LNG and hydrogen hub in Wilhelmshaven.

With this move, Fortescue joins German energy firm E.ON and Eyal Ofer’s shipping company Zodiac Maritime and others who already invested in TES.

According to a joint statement, FFI and TES have agreed to develop “the world’s largest green hydrogen integrated project to help Europe mitigate its current energy and climate crisis and to bring green molecules to Europe”.

The first phase of this partnership is to jointly develop and invest in the supply of 300,000 tonnes of green hydrogen.

TES said the partners are working on final locations for this development and plan to take a final investment decision in 2023.

Moreover, FFI and TES have agreed terms for the Australian company to make an equity investment of 30 million euros ($29.5 million) to become a strategic shareholder in TES.

Fortescue’s unit will also invest 100 million euros for a “significant stake” in the construction of the TES import terminal in Wilhelmshaven, Germany.

The partners will deploy an FSRU chartered from US player Excelerate Energy in Wilhelmshaven in 2023.

In parallel, TES plans to import green hydrogen via the terminal.

An article from Ainslie bullion

The historically large reduction in US job openings announced Tuesday night could be the first sign of an overheated labour market finally cooling off, as well as a sign that the Fed’s monetary tightening strategy is clearly effective as it pertains to its goal for employment, at least for now.

US Job openings dropped by 1.1 million in August, the 2nd largest decrease this decade. We went from 2.0 job openings per person in July, to 1.7 measured in August. 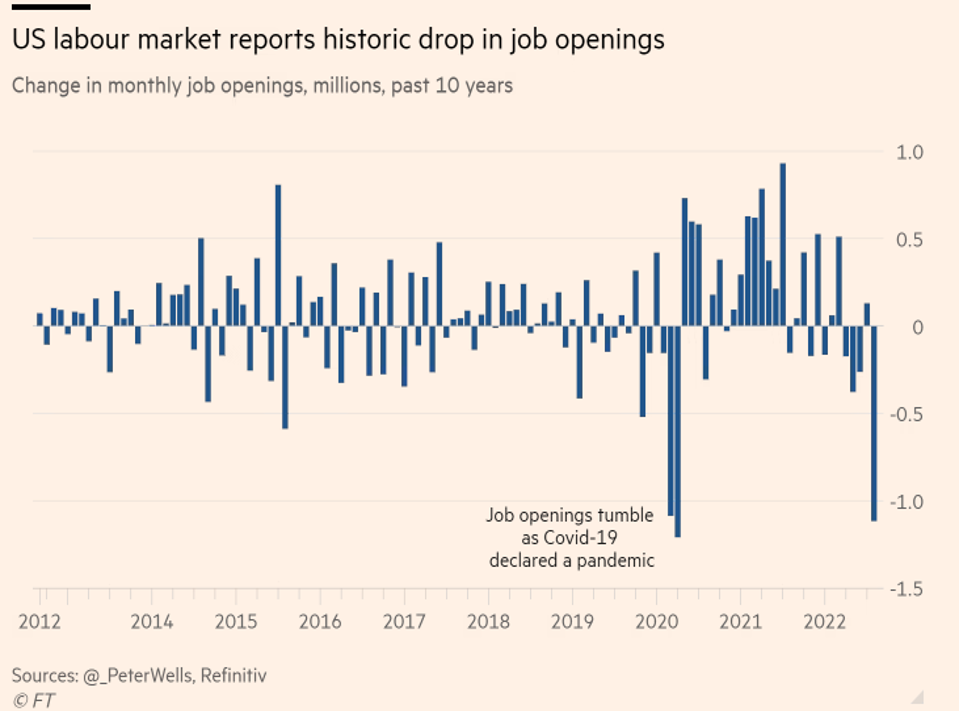 “The heat of the labour market is slowly coming down to a slow boil as demand for hiring new workers fades,” said Nick Bunker, head of economic research at Indeed hiring Lab. This is still very much a job seekers labour market, just one with fewer advantages for workers than a few months ago.

To break it down further, in the job openings in the healthcare and social assistance industries saw a combined decline of 236,000, followed by 143000 in the retail industry. Declines were also reported in the financial, professional, leisure and hospitality sectors.

The so called ‘quit rate,’ viewed by economists as a measure of market confidence, remained unchanged. Layoffs rose to 1.5 million from 1.4 in July.

Most importantly, the unemployment rate increased from 3.5% to 3.7%. 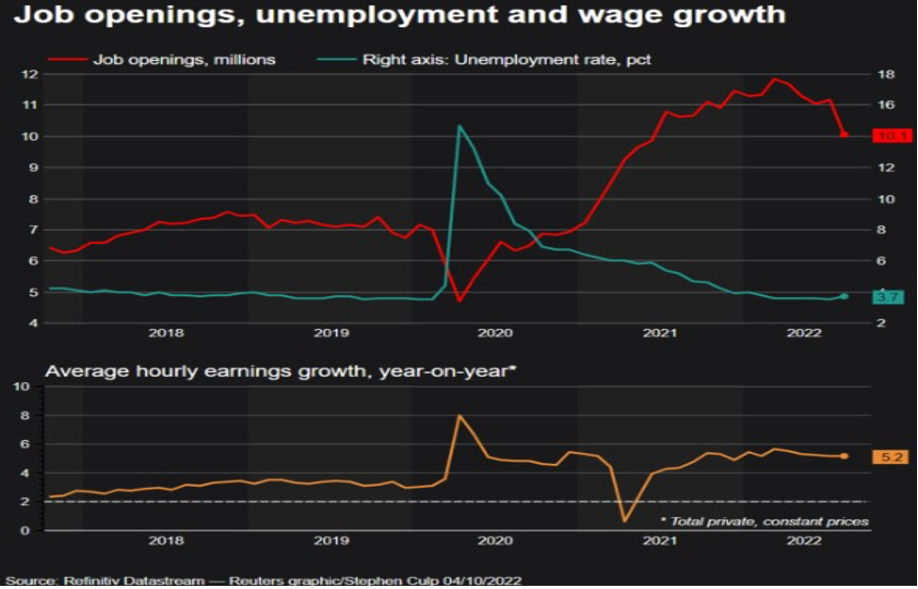 After the announcement, focus turned to the Fed, to see how this would impact monetary policy moving forward.

Theoretically, the lower the unemployment rate the more room the Fed has to raise interest rates. Hence any increase in unemployment like we saw yesterday could imply that the recent rate rises are working, meaning we might not require a continuation under the frantic pace we have been seeing.

The RBA raising interest rates by only 0.25% this month, which was under the 0.5% market expectation, appears to coincide with this narrative.

Conrad Diquarks,, senior economic advisor at Breann Capital in New York, implied the Fed would also be pleased with the report’s outcome.

“The Fed will welcome this apparent decline in excess demand for labour in the hope that it eases wage pressures. However, the ratio of job openings to unemployment in August was at about the same level as seen in the fourth quarter of 2021, which at that time was a record high.”

Last night we saw the US ADP job report show a slightly better than expected jump in new jobs in September (208k v 200k) and better wage growth too. This ‘good news’ saw expectations of more Fed hawkishness rise, shares come off into the red, gold and silver retreat slightly and the USD strengthen last night.  Such contradictory data will continue to see turmoil in markets but clearly there is economic weakness and the Fed is tightening right into it.

The all-important Non-Farm Payrolls data is going to be released this Friday, with the expectation being that the US economy added 250,000 jobs in September – potentially the smallest increase this year. It will be very interesting to see which of the US job opening data or ADP report is already priced into these expectations, and whether the outcome is going to be much worse than originally anticipated.  Either way, expect volatility and as we always say… Balance your wealth in an unbalanced world.

I hope you have enjoyed this week’s read, please feel free to give me a call to discuss your investment needs.