Attached to our report this week you will find the following announcements;

And you make like to read; Santos, Oil Search $21b merger deal finalised (brisbanetimes.com.au)

Thank you to everyone who responded to our quiz question last week, the answer is, the dividend rate for BSP is almost 12%. You will note from last weeks report we have included some very useful information such as dividend payment dates, ex and record dates and we now also include the latest dividend yield for BSP and KAM. Gradually we will add the yields for all of the POMX listed equities as they are announced. Would love your feedback.

Refer details below; for our investors.

On the interest rate front, no major changes with 364 day TBill still trading at 7.20%. Finance Company also remains around the 5-5.5% area but the big change to the interest rate market was the announcement from BPNG that they have reopened the Tap Bond Facility. This is great news for the smaller investor. In the long end of the curve, we still see buying interest in Government issued bonds.


What we have been reading this week 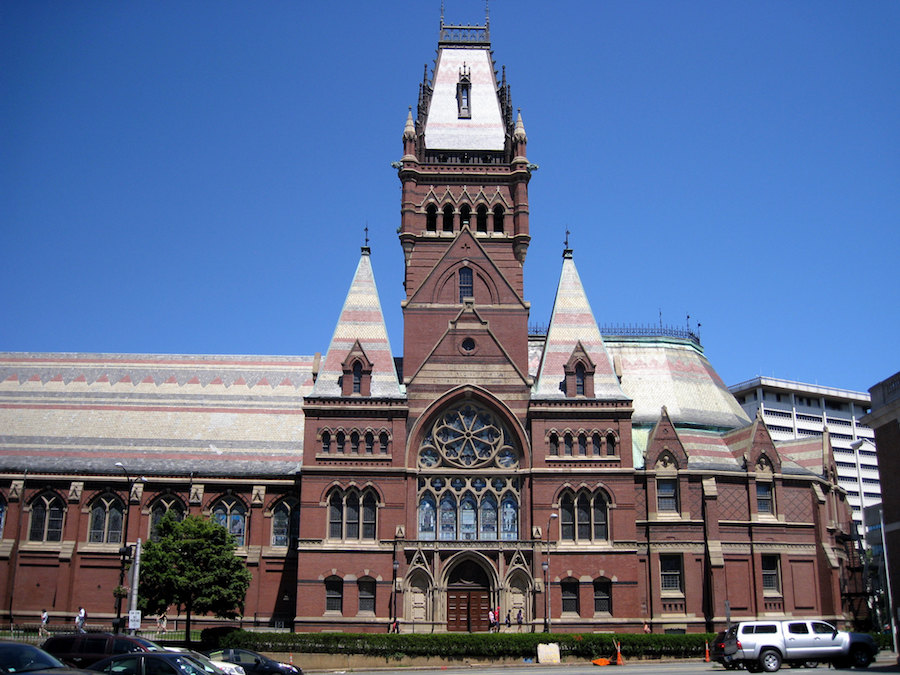 Harvard University has announced it will no longer invest in fossil fuels and will instead use its $42 billion endowment to support the world’s transition to green energy, drawing praise from stakeholders that had long pressed the educational institution to exit such holdings.

President Lawrence Bacow, who for years publicly opposed divesting, said in a letter that the university’s endowment had no direct investments in fossil fuel exploration or development companies as of June and will not invest in them in the future.

The university does have indirect investments in the fossil fuel industry but, according to Bacow, they are “in runoff mode.” These investments, made through private equity funds, make up less than 2% of the endowment, he said.

HARVARD HAD ANNOUNCED LAST YEAR IT WOULD WORK WITH ITS INVESTMENT MANAGERS TO REACH “NET ZERO” GREENHOUSE GAS EMISSIONS BY 2050, BUT THAT WASN’T FAST ENOUGH FOR ITS STUDENTS

The move marks a sharp twist in the university’s position on the matter in the last ten years, which pitted student activists against administrators and dominated campus politics.

In a September 2019 letter published in Harvard Magazine, Bacow wrote that he believed working with fossil fuel companies was a “sounder and more effective approach” to fossil fuels for Harvard to take.

“We may differ on means,” Bacow told students in the letter. “[But we] share the belief that action is required. We just happen to have an honest difference of opinion over what the appropriate action is.”

The university had announced last year it would begin working with its investment managers to reach net-zero greenhouse gas emissions by 2050. That wasn’t fast enough for its students. A group filed in March a complaint with the Massachusetts attorney general to try forcing Harvard to sell its estimated $838 million fossil fuel holdings, The Harvard Crimson reported.

Divest Harvard, one of the activist groups, described the announcement on Twitter as “a massive victory for our community, the climate movement, and the world — and a strike against the power of the fossil fuel industry.”

The Ivy League college, the richest in the US, will be following in the footsteps of other institutions, such as the University of California and the UK’s Cambridge University, which have committed to divesting their endowments from the fossil fuel industry.

The decision is expected to motivate other educational institutions to withdraw their support of businesses contributing to man-made climate change.

The university will also be joining a growing group of big institutional investors and governments that are responding to consumer pressure to accelerate de-carbonization efforts.

The review of a 2013 report predicts that temperatures on Earth will rise by about 1.5 degrees Celsius in two decades and warns that a near-2m rise in sea levels by the end of this century “cannot be ruled out.”

The Population of China in Perspective 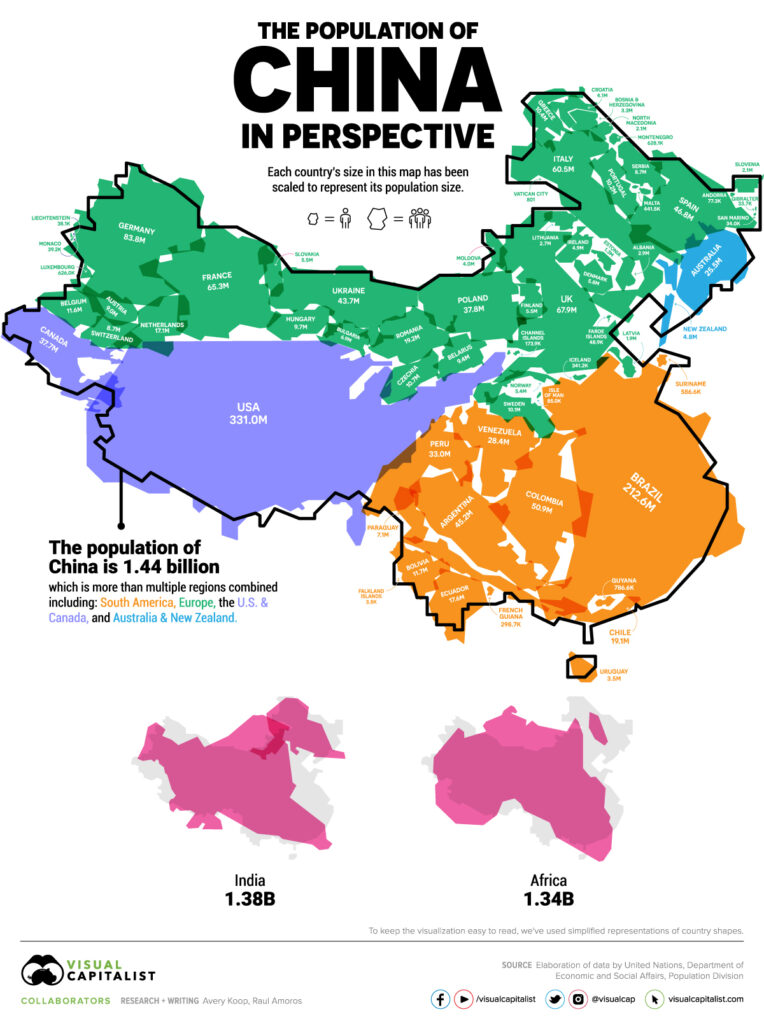 The Population of China in Perspective

China is the world’s most populous country with an astounding 1.44 billion citizens. Altogether, the size of the population of China is larger than nearly four regions combined: South America, Europe (excluding Russia), the U.S. & Canada, and Australia & New Zealand.

Using data from the United Nations, this unconventional map reveals the comparative size of China’s population next to a multitude of other countries.

Note: To keep the visualization easy to read, we’ve simplified the shapes representing countries. For example, although we’ve included Alaska and Hawaii in U.S. population totals, the U.S. is represented by the contiguous states map only.

Looking at history, the population of China has more than doubled since the 1950s. The country was the first in the world to hit one billion people in 1980.

However, in 1979, in an attempt to control the burgeoning population, the infamous one-child policy was introduced, putting controls on how many children Chinese citizens could have.

While the government eventually recognized the negative implications of this policy, it appeared to be too little, too late. The two-child policy was introduced in 2016, but it has not yet reversed the current slowdown in population growth.

The fertility rate has been consistently falling from over 6 births per woman in 1955 to 1.69 in 2020. Today, the median age in China is 38 years old, rising from 22 in 1955. Longer life spans and fewer births form a demographic trend that has many social and economic implications.

Despite these trends, however, China’s current population remains massive, constituting almost 20% of the world’s total population. Right now 71% of the Chinese population is between the ages of 15 and 65 years old, meaning that the labor supply is still immense.

Here are the populations of 65 countries from various regions of the world—and added together, you’ll see they still fall short of the population of China:

To break it down even further, here’s a look at the population of each of the regions listed above:

Combined their population is 1.432 billion compared to China’s 1.439 billion.

Overall, the population of China has few comparables. India is one exception, with a population of 1.38 billion. As a continent, Africa comes in close as well at 1.34 billion people. Here’s a breakdown of Africa’s population for further comparison.

Future Outlook on the Population of China

Whether or not China’s population growth is slowing appears to be less relevant when looking at its sheer size. While India is expected to match the country’s population by 2026, China will remain one of the world’s largest economic powerhouses regardless.

It is estimated, however, that the population of China will drop below one billion people by the year 2100—bumping the nation to third place in the ranking of the world’s most populous countries. At the same time, it’s possible that China’s economic dominance may be challenged by these same demographic tailwinds as time moves forward. 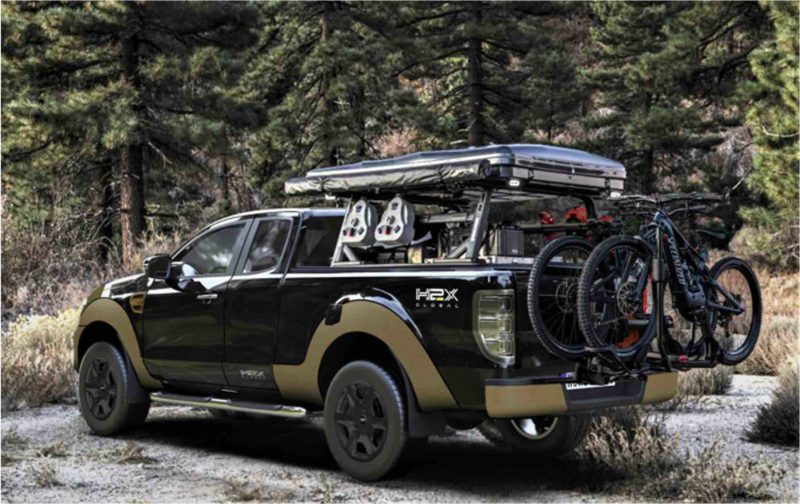 Australian hydrogen fuel cell electric vehicle start-up H2X Global says it has secured more than 200 orders for its Warrego hydrogen ute worth $50 million from around the globe, in just four daqys since it opened orders.

Hydrogen fuel cell electric vehicles (FCEVs) have a long way to go to prove their long-term viability, and their ability to compete with battery electric options, with refuelling infrastructure being one of the biggest barriers.

But it would appear that, even though we are in the early stages of the development of FCEVs, that there are those who see the immediate and near-term value of hydrogen-fuelled vehicles.

The Sydney-based H2X last week announced that it will launch its high-priced Warrego Ute on the Gold Coast in November, ahead of deliveries slated for April, 2022.

That sparked immediate interest, and in the first four days since H2X opened orders last Wednesday, the company says it received more than 200 order requests, worth $50 million if the consumers follow through. The orders came from all over Australia, and from countries such as the Netherlands, Germany, and Malaysia.

“Among the customers ordering the Warrego Ute are several significant energy companies and a number of private buyers,” H2X Global said in its press release, before quoting from one of those same private buyers.

“The Warrego is the vehicle that we believe the community of Green Energy Pioneers have been waiting for, especially with Hydrogen already at parity with diesel kWh for kWh,” said Haim Ptasznik is Director of Veida, a provider of Green Energy Solutions and Hardware, and one of the first purchasers of the vehicle.

“Not to mention, the problems that EV’s pose to the electrical network with grid congestion and excessive unpredictable demand disappear, with hydrogen as a supply.”

The Warrego is the first of a range of hydrogen-fuelled vehicles that H2X is planning to release over the next 24 months.

Featuring a 200kW motor system, 66KW and optional 90KW fuel cell systems, and generating output between 60KW and 100KW, the Warrego has a driving range of 500-kilometres on a mix of highway and city roads, and benefits from quick refuelling times of between 3 to 5 minutes.

“The pre-orders have exceeded all of our expectations,” said H2X Global CEO Brendan Norman.

“We knew they would be popular, but we’ve been blown away by the demand for the Warrego. Orders have literally been coming in from around the world. The word has got out that we’re on to something really special.”

We hope you have enjoyed this week’s report, if you would like further information relating to the POMX or global equity markets, please do give us a call.

Have a great week and stay safe