Hi and welcome to the JMP Report

On the interest rate front, we again saw the TBills aggressively bid with the 364 day auction average at 4.60%. We continue to have access to the Tap Bills and Tap Bonds for the smaller investor, please contact me for further information.

The trading book has us as a net buyer of stock. Please feel free to contact me for a confidential discussion.

PROFOUND CHANGES IN THE GLOBAL ECONOMY” & HOW TO PROFIT –

Crescent Capital released their latest monthly research letter late last week and as usual it provides clear and concise insight into macro markets at present backed up with ‘runs on the board’ through the outperformance of their funds.

Their summary intro sums up the current situation:

“We are currently experiencing profound changes in the global economy that are likely to unleash a plethora of early-stage secular trends in a new inflationary regime. These are long-overdue structural shifts powered by decades of easy money policies and record levels of debt-to-GDP among developed economies:

Unparalleled to any other time in history, the current macro imbalances have drastically distorted the market perception of value and risk. This scenario is setting the stage for significant changes in portfolio allocations from crowded and overvalued assets to unloved and historically cheap alternatives. For macro investors, we think this is one of the most opportunistic times ever.”

Their report is quite lengthy so let’s just flesh out a few of their main points.

We often talk about the lack of exploration and new mine investment for gold and silver combined with longer and longer approval periods before being able to start.  The chart below illustrates this clearly and begs the inevitable question of future supply… 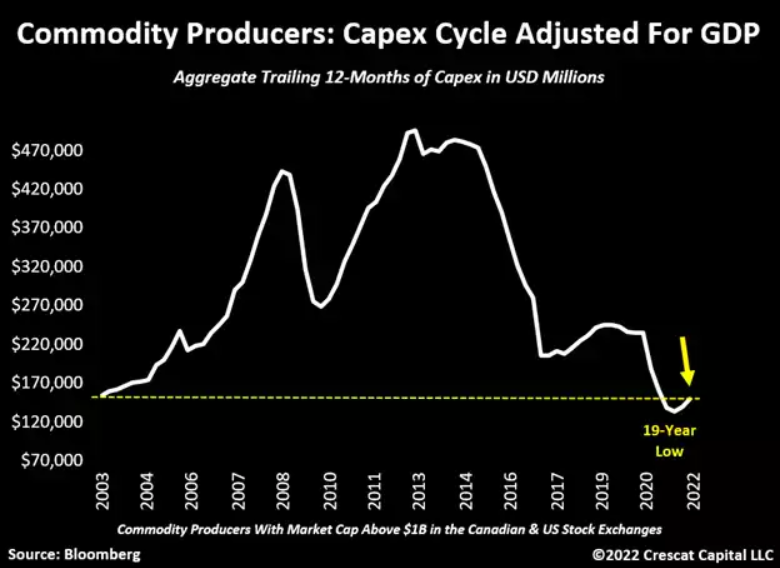 Despite talk of the ‘commodities boom’ the reality is that, compared to the S&P500 and looking at all commodities (clearly gold and silver among many others have not seen the huge rises in some headline commodities) they are still near record under-priced compared to shares dominated by the tech heavy growth stocks. The chart below this is in the process of reversing. The confluence of the free money being removed for those growth stocks and inflation driving up hard asset commodities is one for the ages. 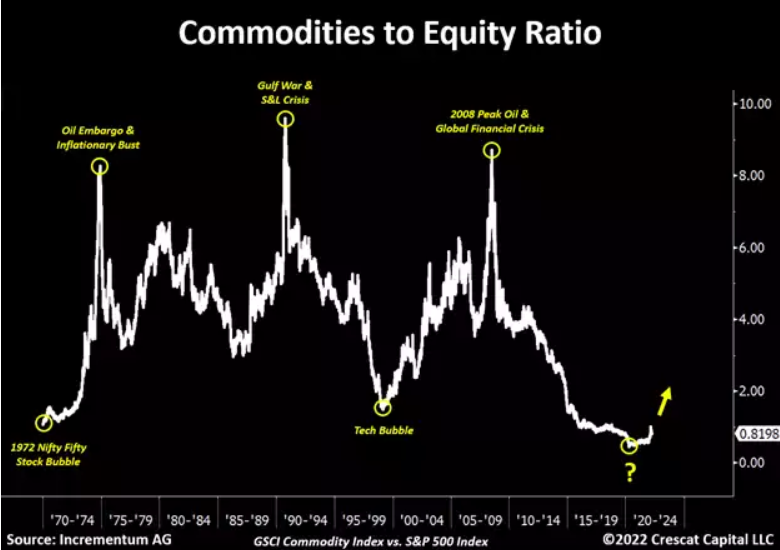 And don’t get them started on silver!

“Silver remains one of the most mispriced opportunities in financial markets today. While the overall commodities market has drastically risen, this high-beta version of gold remains at historically cheap levels. If silver were to just catch up to the move in other tangible assets, it would imply a doubling from current levels.” 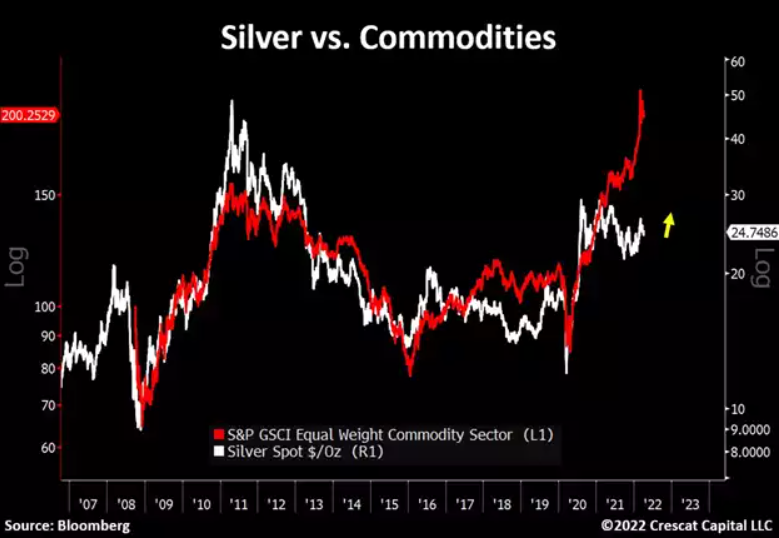 Stellates, €30 billion in investment planned through 2025 to support electrification and software strategies

Company statement:
The climate crisis requires collective action and innovative approaches. As a global sustainable mobility tech company, we have the capacity, the ingenuity and the desire to play a leading role in tackling one of the most urgent challenges of our time.

The €30 billion in investment planned through 2025 to support our electrification and software strategies focuses the right amount of investment on the right technology to reach the market at the right time.

In our first year, we accelerated the commercial momentum of our low emission vehicles (LEV), leveraging the existing portfolio of 34 LEV models including hydrogen fuel cell mid-sized vans. In 2021, global LEV sales reached 388,000 units, up 160% year-on-year with a number one position for battery electric van sales in the EU30.

Ensuring battery supply is also vital to our collective future, which is why Stellates, Total Energies and Mercedes-Benz are accelerating battery development through Automotive Cells Company (ACC) to achieve at least 120 gigawatt-hours (GWh) of cell capacity by 2030. ACC’s objective is to develop and produce battery cells and modules for electric vehicles with a focus on safety, performance and competitiveness, while ensuring the highest level of quality and the lowest carbon footprint.

With the ACC facilities in Kaiserslautern, Germany, Dourine, France, and Turmoil, Italy, we will rely on a total of three battery production factories in Europe. Two additional facilities are also planned for North America through the joint ventures announced with LG Energy Solution and Samsung SDI, one in Windsor, Canada and the other at a future site in the United States.

In the meantime, the assembly plant at Ellesmere Port, United Kingdom, will become the first Stellates factory dedicated to battery electric light commercial vehicles (LCVs) and passenger car models for our Vauxhall, Opel, Peugeot and Citroën brands. The site will be transformed with a new body shop, upgraded general assembly and creation of an on-site battery pack assembly operation, and aims to be completely self-sufficient for electricity as the result of its wind and solar farm projects.

Building on our position as leader in the LCV market in Europe, we will contribute to reduced CO2 emissions in city centres through all-electric versions of our van models and significant investment in hydrogen fuel-cell technology. We recently launched three new hydrogen fuel-cell vans in the European market through our Citroën, Peugeot and Opel brands. This technology offers our fleet customers zero-emission vehicles capable of going anywhere without the delays associated with recharging.

Rendering of the ACC plant in Dourine, France 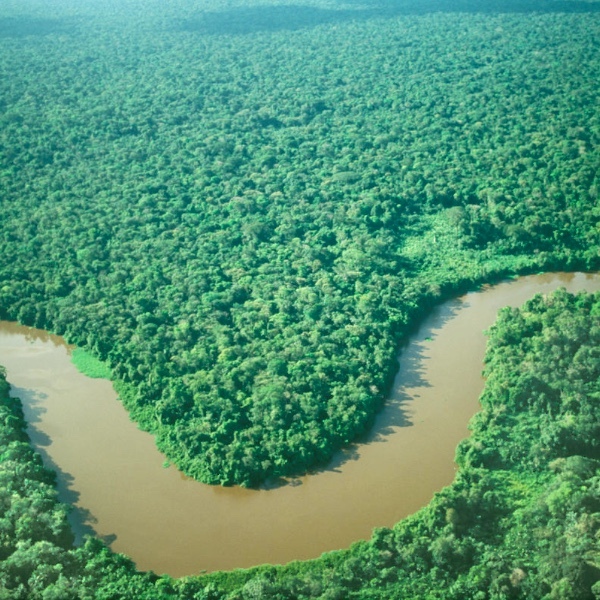 As a devastating human tragedy unfolds in Ukraine, the dangers driven by our dependence on fossil fuels — including global instability, soaring prices, climate change and extreme weather — are undeniable.

The idea is simple: Companies chase profits, so the rules must change to make clean energy more profitable than fossil fuels. That will drive fresh innovations and conservation strategies.

In 2004, if the Brazilian state of Mato Grosso were a country, it would have been the world’s 10th-largest emitter of greenhouse gases, the result of massive deforestation to produce soy and grain-fed cattle. After the state instituted programs to cut deforestation via the REDD+ framework (Reducing Emissions from Deforestation and forest Degradation), the state’s emissions dropped so much that by 2014, it would have been only the 77th-largest emitter, even as soy and cattle production increased.

In 2017, Mato Grosso’s success led Germany’s Ministry for Economic Cooperation & Development to award the state $54 million. Remarkably, 60% of the resources Mato Grosso received went to local communities — including Indigenous and traditional peoples and smallholder farmers — doing their part to protect the forest. And Mato Grosso has maintained relatively low deforestation despite deforestation recently spiking across Brazil.

While the state didn’t trade credits during this period, this is the kind of performance we can expect from tropical forest jurisdictions that participate in a market for high-quality, high-integrity tropical forest carbon credits that deliver the greatest impact for climate, biodiversity and people, allowing companies to purchase these credits with confidence.

Equitable inclusion and benefits are key

Mato Grosso and other REDD+ jurisdictions show that successful carbon pricing must be equitable and just — by supporting local forest communities who are stewards of the forest or by tackling climate pollution and harmful local air quality at the same time.

This can be done with the right policies.

Revenues from California’s cap-and-trade market, a joint effort with Quebec, led to investments that are the equivalent of taking 14 million cars off the road and cutting 66,000 tons of pollution — while adding 170,000 jobs.

The Yurok tribe is one of the beneficiaries of California’s carbon market. The Yurok sold offsets for the carbon sequestered by forests they bought from a timber company, using the proceeds from their offset sales to invest in sustainable forest management practices and to buy additional ancestral land.

Carbon markets can drive private capital to countries and sectors that need it most. In 2021, the LEAF coalition (Lowering Emissions by Accelerating Forest finance) mobilized $1 billion of voluntary payments to tropical forest jurisdictions around the world — the largest-ever public-private effort to protect tropical forests.

And let’s be clear: Companies in the LEAF coalition are complementing — not replacing — their efforts to cut their own supply-chain emissions. LEAF investments are also designed to deliver social safeguards and benefits for communities that are preventing deforestation.

The $1 billion LEAF has mobilized so far is a drop in the bucket compared with what will happen when this effort expands. Let’s imagine a future in which LEAF jurisdictions prevent 2.5 gigatons of CO2 emissions per year from deforestation or forest degradation. That could easily amount to $25 billion a year or more in results-based payments.

When done right, carbon-pricing policies can cut the costs of achieving lowered emissions targets, which can lower political barriers to more ambitious goal-setting.

Carefully crafted carbon markets can secure billions of tons of emissions reductions, ramp up global ambition, support forest communities and help realize the full promise of the Paris Agreement — speeding our transition to a safer climate for everyone.

I hope you have enjoyed this week’s report, if you would like further information, please feel free to contact me for a confidential discussion.