Good morning and welcome to this week’s JMP Report,

I hope you enjoy this week’s read. If you would like more information on trading shares, how our business can offer Investment Management Services or you would like a Superannuation Health Check, please do give me a call.

On the interest rate front, the Financial System remains very liquid and 364 day TBill auction results at remaining 7.20%. There are no official announcements for another Treasury Bond Auction but I personally believe we will see another auction before the year is out. We are buyers of Bonds along the curve.

Please see the attached documents for KSL’s Financial Statements and OSH Half Yearly Investor Presentation after the release of their Half Year results.

Dire Shortage Of Containers Amid Other Setbacks Are Impacting Coffee Supplies

World coffee supplies are suffering a fresh setback from stringent travel curbs imposed in second-biggest grower Vietnam to control the worsening spread of the infectious delta variant of the coronavirus.

The government is keeping the city of Ho Chi Minh, the exporting hub, under lockdown because of a surge in virus infections, and has tight movement controls in place in some key producing areas of the Central Highlands.

Exporters are struggling to transport beans to the ports for shipment, according to traders and suppliers. That’s adding to a raft of other logistical problems such as a dire shortage of containers and soaring freight rates.

Trade groups, including the Vietnam Coffee-Cocoa Association, have petitioned the government to ease the curbs, which they say cause delays, raise costs and put shippers at risk of having to compensate buyers for late delivery.

In response, Transport Minister Nguyen Van The this week ordered authorities in the south of the country to do everything possible to facilitate the transport of farm products, such as coffee and rice. He told local governments they must avoid all unnecessary requirements and burdensome paperwork.

Global coffee prices have been on a tear amid mounting threats to supplies from South America to Asia. Drought and frost ravaged crops this year in top grower Brazil, which produces the premium arabica variety, adding to the widespread logistics issues in Vietnam and Indonesia.

While some roasters decided to switch to cheaper supplies of robusta beans from Vietnam after the frost destroyed production in Brazil, soaring prices and shipment woes now make that option far less appealing.

With assistance from Marvin G. Perez.

HOW WILL WE SURVIVE 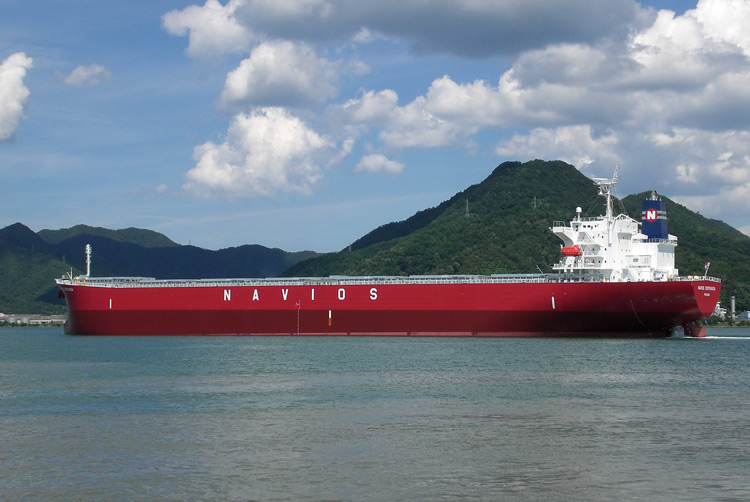 The Monaco-based Navios Maritime Partners (NMM) is acquiring the debt-laden Navios Maritime Acquisition Company (NNA) to create a massive containership, bulker, and tankship company with over 140 ships. This will make it the largest US publicly listed company by vessel count.

“The combined entity will be the largest U.S. publicly-listed shipping company in terms of vessel count, with 15 vessel types diversified across three segments, servicing more than 10 end markets,” said Angeliki Frangou, Chairwoman and CEO of Navios Maritime Partners. “About one-third of our fleet will be in each of the dry bulk, containership, and tanker segment. This will result in a stronger, more resilient entity, mitigating sector-specific cyclicality.”

Tradewinds reports the combined company will feature 55 bulkers, 43 containerships, and 45 tankers once all newbuildings have been delivered for a total fleet worth an estimated $4.2bn and a combined market capitalization of some $822m based on current share prices of both companies.

The merger is expected to close in the fourth quarter of 2021.

Climate change is no longer a fiery apocalypse that we expect to happen in the far off future. Rising sea levels, wild-fires, heat waves and extreme weather events are already wreaking havoc everywhere and could cost the global economy a staggering $1 trillion dollars over the next five years in crumbling infrastructure, reduced crop yields, health problems, and lost labor as per the Carbon Disclosure Project (CDP).

A big part of climate change is being wrought by global warming, thanks to rising carbon levels in the atmosphere. Industrial activity has spewed out some 2,200 gigatons of CO2 since the 19th century industrial revolution and continues to emit another 40 GT every year. At this rate, we could exceed the 2,620 GT limit in just over a decade, leading to irreversible damage to entire ecosystems, economies and communities.

With the transition from fossil fuels to renewables in full swing in many states, natural gas serves as the energy bridge due to its lower emissions profile compared to coal. After a brief reversal, natural gas prices have been soaring again with Ovintiv Inc.(NYSE:OVV), Cheniere Energy (NYSE:LNG) and EQT Corp.(NYSE:EQT) our top picks.

Unfortunately, the same cannot be said about its chilled brethren, with LNG having one of the most emissions-intensive upstream resource themes in the energy sector.

Meanwhile, oil and gas giant Saudi Arabia has abandoned plans to develop LNG from its Jafurah gas field and instead plans to make a much cleaner fuel: Blue hydrogen. Blue hydrogen is derived from natural gas through the process of steam methane reforming (SMR), with the carbon dioxide emissions captured and stored underground using Carbon Capture, Utilization and Storage (CCUS) technology.

And now researchers are saying that the use of carbon capture and storage (CCS) can have a material impact on the carbon emissions of LNG projects.

According to Wood Mackenzie anywhere from 25-50% of the CO2 emissions depending on the strategy used can be removed from LNG projects using CCS technology.

According to Woodmac, about 40% of the total scope 1 and 2 LNG emissions come from the process of gas liquefaction. The main options for reducing LNG emissions include CCS, carbon offsets, electrification, methane leakage reduction, and the use of renewables and batteries.

Luckily, LNG players are well placed to employ CCS to lower their emissions by simply repurposing their existing infrastructure.

The first approach involves capturing reservoir CO2. The big advantage of this method is that the acid gas removal unit (AGRU) used to capture CO2 does not incur additional costs since all LNG projects remove CO2 from the feedgas stream before liquefaction to prevent the CO2 from freezing and blocking processes. WoodMac says reservoir CCS has the potential to lower overall intensity of LNG projects by 25%, and in some cases up to 50%.

Woodmac says CCS will play a significant role in reducing emissions from LNG projects as long as country-specific legislation progresses and costs can be brought down.

Meanwhile, Wal van Lierop of Chrysalix Venture Capital and an investor in Canada-based carbon capture startup Svante has proposed creating policies that will make carbon markets not only feasible but profitable.

Lierop argues that carbon pricing, CCSU technology and policies need to be such that capturing, repurposing or permanently storing carbon dioxide becomes more profitable than emitting it into the atmosphere. If policymakers were to price CO2 at $100 per ton, the 40 GT of CO2 that the world emits annually represents a $4 trillion opportunity for carbon capture firms. If that figure seems monstrous, consider that it represents just 5% of the global economy and is certainly lower than the nearly $70 trillion in damages that the economy would otherwise suffer in the face of a full-blown climate disaster.

It’s not such a far-fetched idea, either.

Here in the United States, Section 45Q(a)(1) allows a credit of $20 per metric ton of qualified carbon oxide captured by the taxpayer using carbon capture equipment which is originally placed in service at a qualified facility before the date of the enactment of the Bipartisan Budget Act (DOE). It’s essentially a tax code that provides a performance-based tax credit for carbon capture projects that can be claimed when an eligible project has:

Still, that might be too low to encourage carbon capture firms whose breakeven point is higher than $50/ton. Coupling 45Q with a Fee and Dividend system could be a more effective solution. This system is currently under consideration in the U.S. House of Representatives H.R.763. The fees collected under H.R.763 would be distributed as dividends to all U.S. citizens to offset higher gas prices and elevated costs for hydrocarbon-based goods.

If you would like to discuss with us your investment questions, please reach out for a confidential discussion.

Have an awesome week,