Hello and welcome to this week’s JMP Weekly Report

On the interest rate front we saw the 364 day bill auction rate fall slightly to 5.05% (negative .45% based on 5.5% inflation forecast) which was firmly bid with the Bank of PNG issuing further stock to meet some of the oversubscription.

But the big news of the week is……we have a GIS auction,

There are 8 maturities totalling 750mill. As we saw in July 2021 (last auction), very little volume is on offer in the long end with 150mill split between the 8, 9 and 10yr. This is the area of the curve where most of the interest will be, effectively driving yields down and the auction redirecting some of the stock from the shorter end to meet the demand in the long end at attractive long term borrowing rates, let’s see.

At the bowser in the last few days we have seen diesel prices rise by more than 10%, so investors will need to keep a very keen eye on their nett return (gross return less inflation) compared to other assets which do provide some hedge against inflation.

Microplastics found in blood for the first time, study says 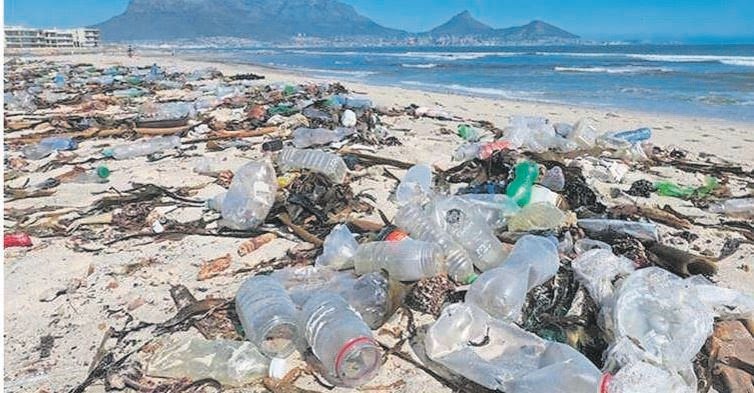 Microplastics were detected in human blood for the first time, according to a study that may indicate the potential for particles to travel to organs.

Scientists found 17 out of the 22 healthy people they took samples from had quantifiable amounts of plastic particles in their blood. Researchers said further study is needed to determine the health risks of the materials.

Microplastics are ubiquitous in the environment and can be found in marine animals to drinking water, though the World Health Organization has said there’s insufficient information to draw firm conclusions about how toxic they are for people and more research is needed. Over 300 million tons of plastic are produced every year and at least 14 million tons end up in the ocean where they can be ingested by animals and risk entering the human food supply chain, according to the International Union for Conservation of Nature.

Some materials can take centuries to break down, and growing concerns about their pollutive impacts have spurred bans on single-use plastic bags. But the pervasive presence of synthetic products in modern life – from water bottles to takeaway containers and clothing – underscore the challenges of regulating and limiting their use.

The study, funded by the Dutch National Organisation for Health Research and Development and Common Seas, a group working to cut plastic pollution, was published in the journal Environment International on Thursday. The researchers adapted existing techniques to detect and analyse particles that were as small as 700 nanometers in size.

Researchers targeted five common plastics including polyethylene terephthalate, also know as PET and used in bottles, and polyethylene, which is used in food packaging. The team used steel needles and glass tubes to avoid contamination.

The results support the hypothesis that human exposure to plastic particles results in absorption of particles into the bloodstream, but further study is needed to assess the impacts of exposure and whether it is a public health risk, the study said.

The Fed has finally joined other central banks in raising interest rates, taking the Fed Funds rate from a range of 0-0.25% to 0.25-0.5%. This was well flagged and reflects the tight US labour market and high inflation.

The Fed flagged another six rate hikes this year and the start of quantitative tightening soon.

First rate hikes in a tightening cycle don’t normally signal the end of a bull market in shares but they are consistent with a more constrained & rougher ride. High inflation & the war in Ukraine also add to the risks.

After much anticipation, the US Federal Reserve has raised its Federal Funds target interest rate from a range of 0-0.25%, where it’s been for the last two years since the pandemic started, to the range of 0.25-0.5%.

Central banks in various countries including Korea, Norway, NZ, the UK and Canada started raising rates in the last six months as economies recovered, labour markets tightened, and inflation surged in response to supply constraints. The Fed has been flagging the start of rate hikes for this year for six months and started warning of a move in March early this year after inflation kept surprising on the upside. So the move was fully factored into financial markets with US shares actually rallying on positive Fed comments on US economic growth.

The so called median “dot plot” of Fed officials interest rate expectations has now moved up to seven 0.25% hikes this year from three in December and while the Fed sees uncertainty flowing from the war in Ukraine its now more focused on controlling inflation, seeing the US economy as strong. 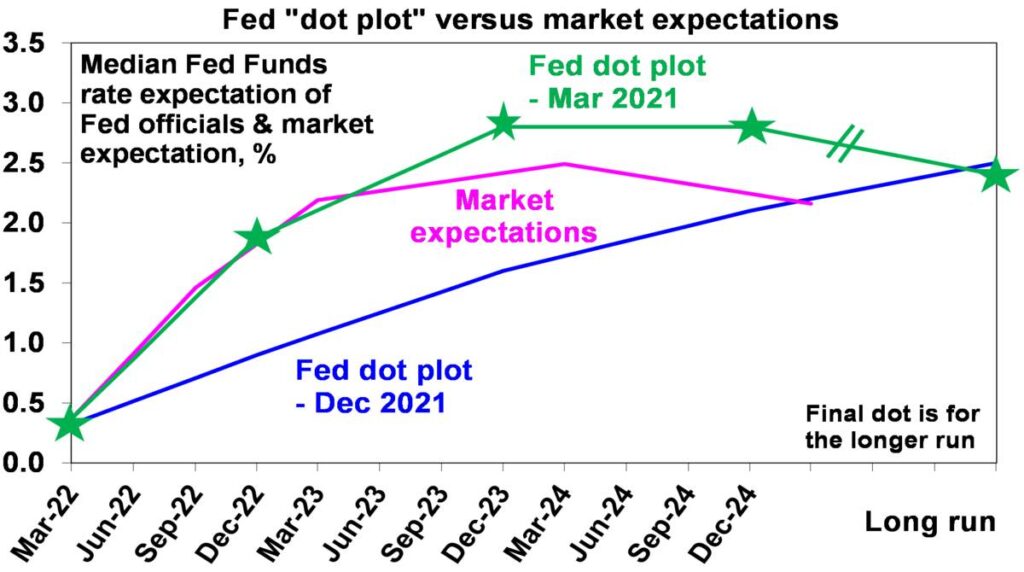 The Fed also signalled that it will likely start Quantitative Tightening (ie, running down its bond holdings – to be achieved by not replacing bonds as they mature) as soon as May.

Why the hike?
The reasons for the hike are simple and are the same as seen in other countries. Economic activity has recovered, the labour market is very tight with unemployment at 3.8% consistent with the Fed’s aim of maximum employment, inflation is at a 40-year high and core inflation is at 6.4%yoy and it’s still rising.

The investment cycle
From a broad cyclical perspective, the Fed joining other central banks in starting to raise interest rates should not be a major concern for investors. But its yet more confirmation that we have moved into a more constrained and volatile phase of the cycle for shares. A typical cyclical bull market has three phases:

What does it mean for investment markets?
Of course, we don’t always make it to investor euphoria, but (abstracting from the uncertainty flowing from the war in Ukraine), we are likely in Phase 2 of the investment cycle. Monetary support is diminishing & we are now more dependent on earnings growth. This shifting of the gears from the Phase 1 valuation driven gains typically sees some slowing in share market gains and more volatility. Against this background: 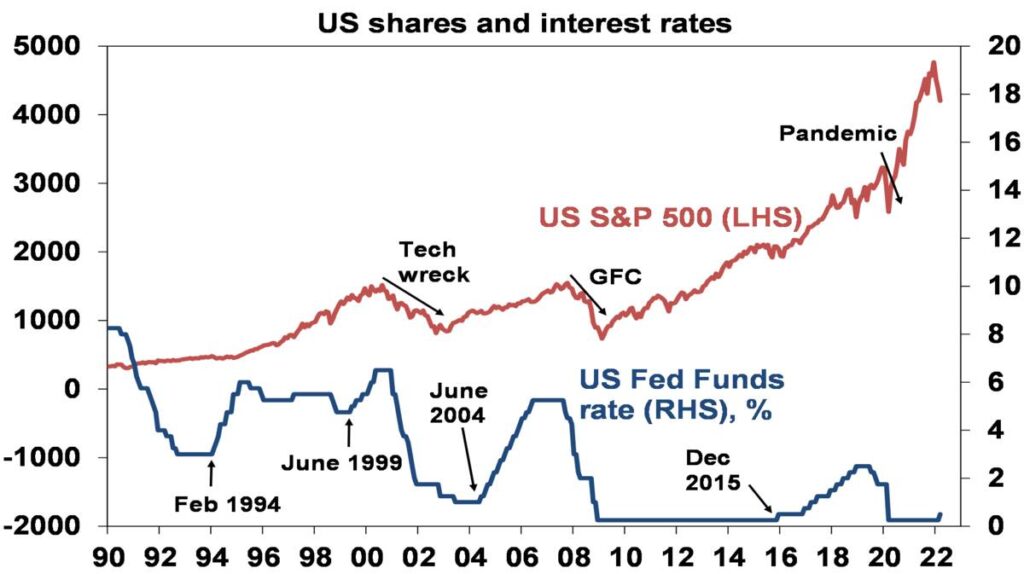 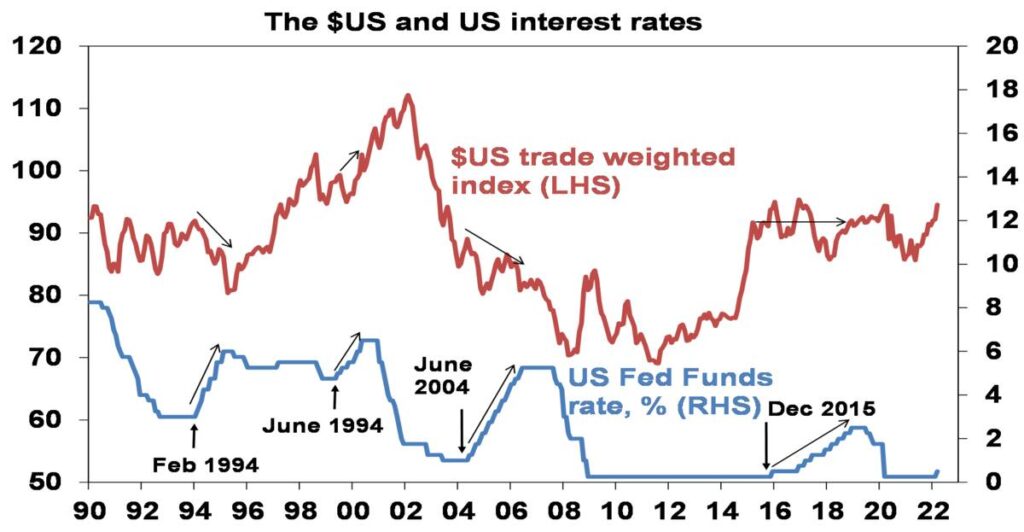 In summary, while the Fed’s move to raise rates is consistent with volatile and constrained share market returns ahead, it’s not necessarily consistent with an end to the bull market (or at least the start of a deep bear market) as monetary policy is far from tight and unlikely to be enough to drive a US recession. This is more of a risk for 2024 than for 2023 or 2022.

Risks
While past experience suggests little reason to be too concerned by the first US rate hike, there are two main risks:

Provided the conflict in Ukraine does not expand to include Russia directly at war with NATO forces, Russian gas and energy to Europe is not cut off and recovery in production from the pandemic can continue (albeit with periodic setbacks as in China at present) then some pressure may come off inflation (and hence central banks including the Fed) later this year.

Impact on Australian interest rates & the $A

The RBA will soon follow the Fed in starting to raise interest rates. We expect the first hike to come in June taking the cash rate to 0.25%, with three hikes in total this year taking it to 0.75% by year end. This is not because the Fed is raising rates. As the first chart shows the link between US and Australian rates has been tenuous in recent times with the RBA hiking in 2009-10 when the Fed did nothing and the RBA cutting or on hold when the Fed raised rates over 2015 to 2018. They only move together if there is cyclical alignment and this year there is, with both the US and Australia recovering from the pandemic and seeing rising inflation. However, Australian interest rates are likely to rise less than US interest rates reflecting lower inflation in Australia and the start of a downturn in Australian property prices which will dampen the pressure to raise rates much. This means the gap between Australian and US interest rates will likely go negative.

While a decline in the short-term interest rate gap between Australia and the US normally puts downwards pressure on the value of the $A this is likely to be more than offset by strong commodity prices which is being accentuated by the war in Ukraine. As a result, unless there is a global recession, we continue to see the $A rising over the next year. 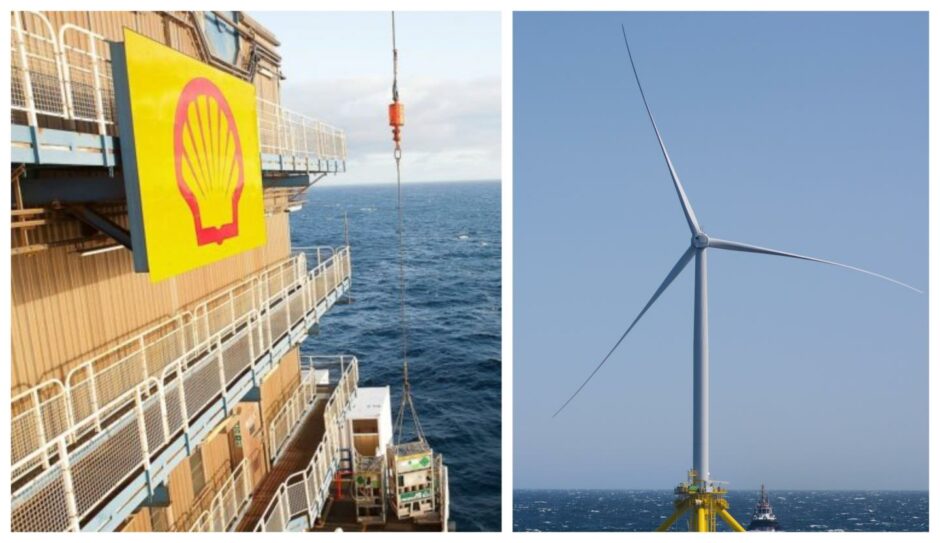 Shell has announced it will invest up to £25 billion in the UK energy system in the coming years.

Shell’s Nelson platform and a floating turbine from the TetraSpar project in Norway it is partnered in.

Shell has announced it will invest up to £25 billion in the UK energy system in the coming years.

Writing in response to Rishi Sunak’s Spring Statement, Shell UK country chair David Bunch said “I can announce that Shell UK is planning to invest between £20 and £25 billion into the UK energy system over the next decade”.

Mr Bunch referenced the Chancellor’s calls for a “culture of enterprise” and greater capital investment to increase UK productivity, growth and skills development.

More than 75% of Shell’s investment will be in low and zero-carbon products and services, including offshore wind, hydrogen and electric mobility.

Mr Bunch said: “These investments, subject to board approval, aim to propel the UK closer to net zero and help to ensure security of supply whilst stimulating economic growth and jobs.

“However, Shell cannot act alone. Investing this money requires urgency of action across government to deliver the enabling policy and business case frameworks. These must address both the supply and demand side of the energy transition (in areas such as hydrogen and CCS, for example).”

Mr Bunch also said the UK will need “stable political discourse,” he added, “as I mentioned in my meeting with the Prime Minister and industry leaders last week.”

Industry leaders met the PM at Downing Street last week, seeking solutions on how to increase reliance on UK energy supply rather than imports from Russia.

“We look forward to working together to help the UK secure its future energy supply and move towards its 2050 net-zero target”, Mr Bunch added.

He said that more detail on Shell’s plans would be set out in the months ahead.

One segment of the plans include £500 million to be spent on the UK supply chain should the Jackdaw gas project – which Shell recently re-submitted plans for – get the go ahead.

In February last year the firm unveiled an “accelerated” net zero strategy, confirming oil production peaked in 2019 for the firm.