CPL announced a final dividend of .04t during the week.

On the interest rate front we saw very little in the way of new nett 364 day paper with the auction average around the 5.05%. But wait for it……the long awaited GIS auction results…….there weren’t any.

We received notification from BPNG on Thursday that the auction would not go ahead as the Approval Process was not fully completed and the auction was cancelled. What is concerning is the auction process has seen the market’s bids.

Of note was that the maturities are not new issues, the stocks are existing series. I will update our clients as we have more information regarding the new GIS auction. TAP facilities are still open for bidders with a minimum of K5000 to invest.

Australia is on course to hit a notable century – but not on the cricket field. Around 98 hydrogen projects have been chalked up in recent months, a substantial number aimed at a future export market. And in February one of them, Victoria’s Hydrogen Energy Supply Chain (HESC), created a minor sensation with the first trial cargo of liquid hydrogen to Japan.

Australia is anxious to get a foothold in the nascent hydrogen market to counter its established, climate-compromised position as a major exporter of coal, LNG and crude oil.

The opportunity is certainly worth pursuing. Demand for Australian hydrogen could exceed 3 million mt/year by 2040, potentially worth A$10 billion/yr, according to the Australian Renewable Energy Agency.

Hydrogen projects started emerging in Australia about a decade ago while HESC was announced in 2018. On Feb. 25 the Suiso Frontier carried liquid hydrogen from the Port of Hastings in Australia to Kobe in Japan, demonstrating the possibility of transporting the fuel long distances at minus 253 degrees Celsius.

The cargo received ironic remarks from hydrogen cynics for carrying just 2.6 mt of liquid hydrogen versus the vessel’s capacity of 75 mt. The fact the hydrogen on board was produced via coal gasification also drew criticism.

Yet HESC remains confident it can reduce costs via economies of scale so that by 2030, when the project is due to reach commercial status, production of 225,000 mt/year will be competitively priced and low-carbon, thanks to carbon capture and storage.

There are other projects that exemplify Australia’s ambition as well as its penchant for technology.

For instance, the Tiwi Hydrogen project plans to export compressed hydrogen in specially built carriers from 2026.

This project plans to produce 100,000 mt/yr of renewable hydrogen as it seeks to benefit from a shorter route to market from Australia’s northern tip. 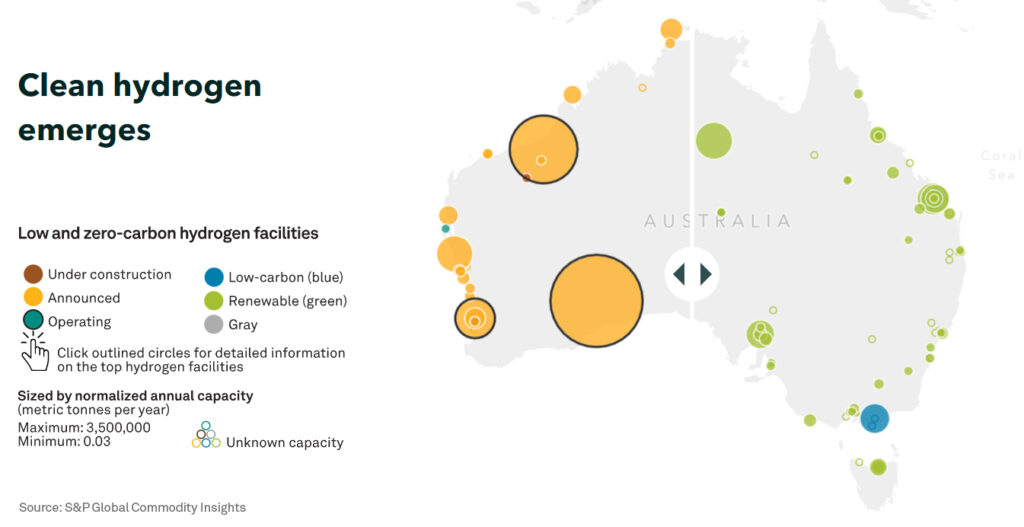 “Australia is well-placed to make hydrogen its next big export,” according to the country’s National Hydrogen Strategy. “We have all the natural resources needed to produce it, a track record in building large-scale energy industries and a reputation as a proven partner to Asia’s biggest energy importers.”

With its plans for hydrogen-fired power generation, fuel cell vehicles and fuel cell ships, Japan is the key target market for Australia.

Other relationships are being nurtured too. A June 2021 Declaration of Intent with Germany saw the joint funding of the Hydrogen Innovation and Technology Incubator, or HyGATE.

Meanwhile Australia and Singapore announced an A$30 million partnership in 2021 to accelerate deployment of low emissions fuels and clean hydrogen in maritime and port operations.

And the Port of Rotterdam and Western Australia signed a memorandum of understanding in November 2021 to develop a renewable hydrogen export supply chain.

The next big step will be when the first hydrogen purchase agreements are signed.

Australia’s Port Anthony Renewables in Victoria invited expressions of interest Feb. 14 for offtake of renewable hydrogen to be produced at the port and shipped overseas or sold domestically from 2025.

HESC and InterContinental Energy say they are actively in talks with potential offtakers.

Australia targets a sub-A$2.00/kg ($1.43/kg) price for renewable hydrogen under its Technology Investment Roadmap, lower than current levels of over A$5/kg.

Finally, Fortescue and Airbus have signed a memorandum of understanding to cooperate on developing hydrogen as an aviation fuel, striving for a first zero-emission aircraft in service by 2035.

For the Australian hydrogen trade that would be a big win worthy of a standing ovation.

A great news today for our energy natural resources industry as Australian Government approved $1.25b loan to Iluka Resources, to develop Australia’s first integrated rare earths refinery in Western Australia. To become a global critical minerals powerhouse by 2030, we need lots of plans, commitments and actions!

Critical minerals are metals and non-metals that are considered vital for the world’s major and emerging economies, yet whose supply may be at risk due to geological scarcity, geopolitical issues, trade policy or other factors. These include minerals being used in the manufacture of mobile phones, monitors, wind turbines, electric cars, solar panels, and many other high-tech applications.

Another news, in an executive-level roundtable on critical minerals held between Aus and US governments on March 30, it was highlighted the commercial potential for both Australian and US industries and underscored the need to strengthen capabilities across all segments of the supply chain, including extraction and downstream processing – also our respective financing mechanisms to support private investment in supply chains.

What do you think? Will we be able to plan and realise this great opportunity for ourselves and the world – there are positive indicators but many challenges ahead too – time will tell! 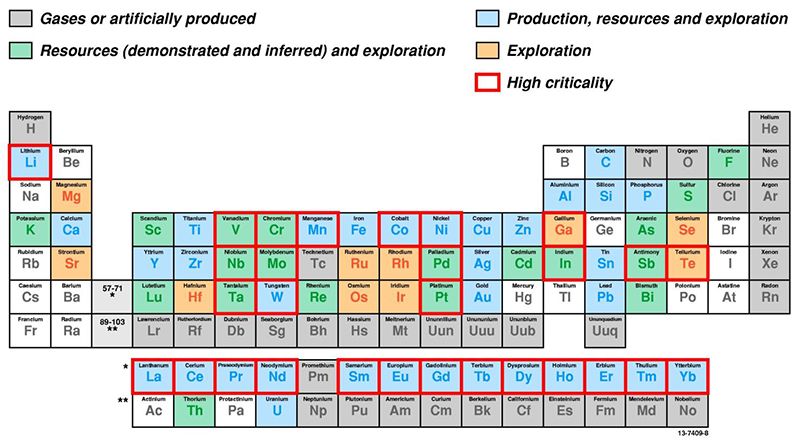 We are experiencing a very solid year to date with the performance of gold (and every year since 2000) in a variety of currencies.  What is particularly important to note is that the performance of gold this year has been achieved ostensibly with relatively limited ETF involvement as equities traders may have just pivoted from growth to value shares and not yet gold with gusto.  We share more of the In Gold We Trust preview charts to illustrate.

Consider that in a basket of global currencies, gold hit a new all time high this year: 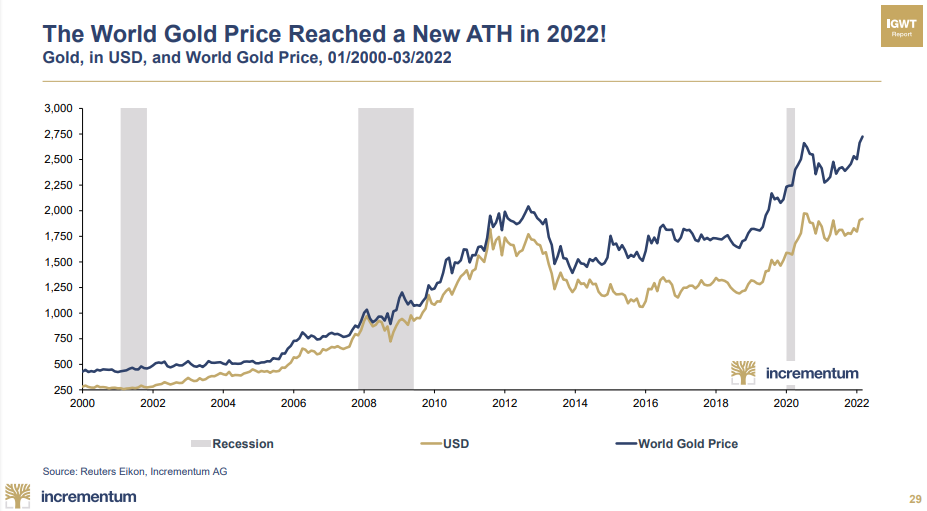 And yet that has not been driven by the funds that only deal in ETF’s.. 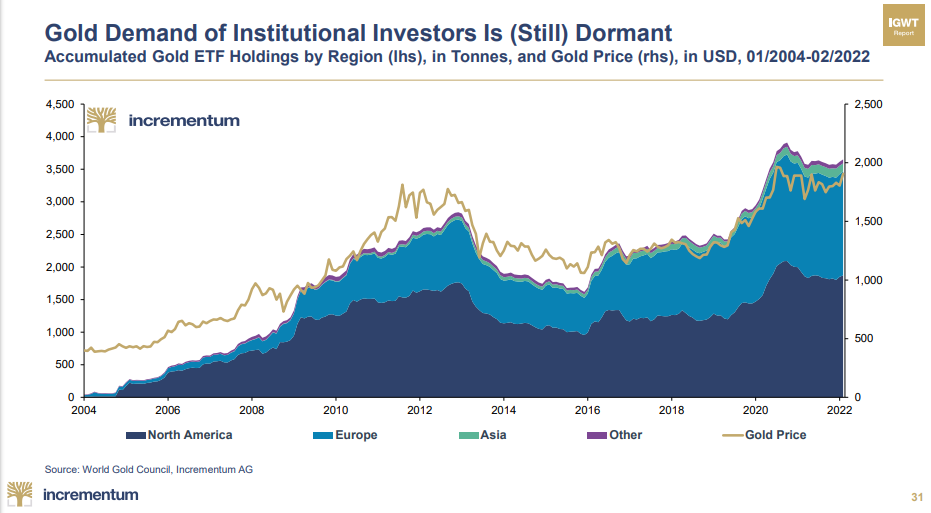 However, and somewhat counterintuitively, looking at gold ETF holdings against the entire 5000 company Wilshire 5000 index, you can indeed see the sudden rotation into gold. 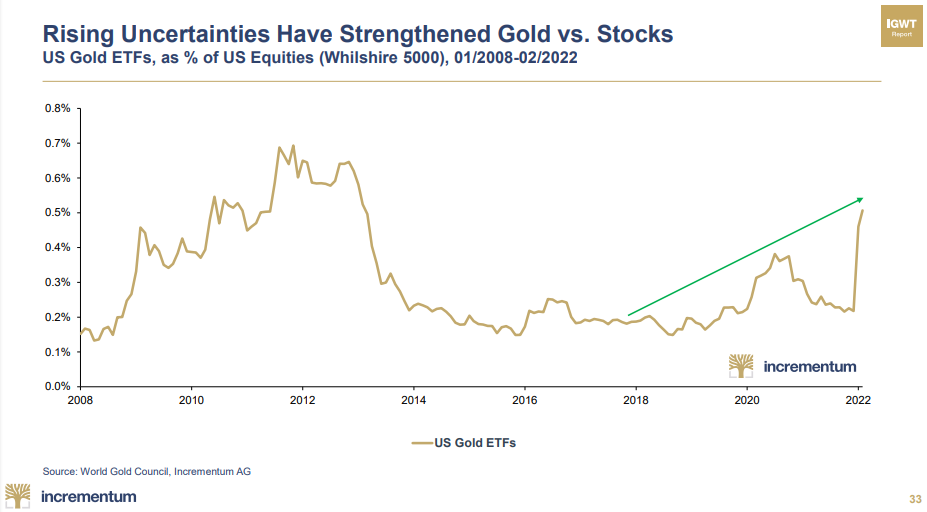 Why?  Well history tells us that lack of correlation, and indeed negative correlation between shares and gold says it is one of the best places to be when markets crash… 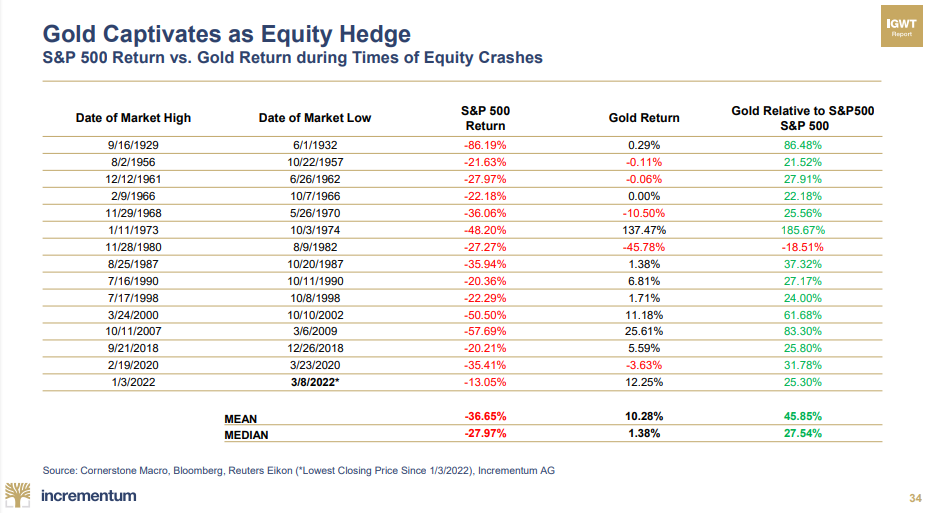 Last week we stepped through why a recession is now almost a certainty and the stagflationary environment we are likewise almost certainly in.  The writing is on the wall, its only a matter of whether you prefer buying low and selling high or the other way around.  That classic saying ‘better a year too early than a day too late’ should be front of mind…