The PNG economy received welcome news with the PNG Government and Barrick agreeing to move forward with a new Agreement. The details have been widely reported but this is good news for PNG.

On the interest rate front, we saw 364 day TBills average 7.20% again. The volume on offer was much lower which may point to the likely GIS Auction for later this month.

We are still seeing Fincorp offering 5.50% in the depo market with the yield curve remaining positive from the 1yr through to the 10yr area.

BlackRock Inc. has raised $4.8 billion for a new fund to invest in renewable power assets around the world – almost double its initial target.

The company’s real assets division closed on its third global renewable power fund, drawing money from over 100 institutional investors. It’s the latest sign of increasing interest from investors to buy into the surging green power sector.

“You’re seeing a major shift in institutional interest in decarbonization and wanting to allocate into it,” said Jim Barry, chief investment officer of BlackRock Alternatives Investors. “The pandemic has only sustained and added to that momentum.”

The fund’s managers had originally targeted about $2.5 billion when they started raising money in the second half of 2019. They continued beyond that goal last year and added another $1.2 billion in the first three months of this year. The demand is driven partially by investors wanting to tap into the fastest growing part of the power sector as well as a hunt for yield, Barry said.

This is the largest renewable power fund to date for BlackRock Real Assets, nearly triple the size of the previous fund. BlackRock has already started investing the fund’s money, including an American solar company and a solar power developer in Taiwan.

The company plans to invest mostly in wind and solar assets in Europe, the U.S. and some countries in the Asia Pacific region like South Korea, Japan and Taiwan. BlackRock has already signed a deal linked to offshore wind in Asia.

While in the past the company mostly bought construction-ready or operational renewable power assets, this time they are diversifying to earlier-stage projects and also buying into developers. The fund will also look to invest in other technologies like smart meters, smart power grids and infrastructure to support electric vehicle.

The 1 Big Reason to Invest in Renewable Energy Stocks- (This is not a JMP Securities sponsored article. Please do not make any investment decisions based on this article without seeking further professional advice.)

Green energy is set to start paying for itself.

Renewable energy is a hot topic right now, and the sector is popular with investors hoping the new Biden administration will invest in it. That popularity could be a near-term thing, depending on which way the political winds are blowing. However, I decided to look beyond the near term and focus on the long-term case for investing in the leaders in wind power: General Electric (NYSE:GE), Vestas (OTC:VWDRY), and Siemens Gamesa Renewable Energy (OTC:GCTAF).

The key argument for investing in renewable energy stocks involves a reason based on these truths:

The EIA measures energy plants’ viability through the average value cost ratio. The ratio is the average revenue available to the generator within a given period divided by the cash resources required to build and operate a generator over a given period. A ratio of more than 1 means a project generates more revenue than the cost needed to develop and operate it. In other words, it makes sense to build it.

Now, let’s look at the EIA projections across various options. For reference, the most attractive of the traditional plants is the combined-cycle plant. These plants are made up of a gas turbine that generates electricity and a steam turbine that runs on exhaust heat captured from the gas turbine. GE Power and Siemens Energy (OTC:SMEG.F) are the leaders in combined-cycle plants.

First, let’s look at the data with the projections for 2023 and 2040, factoring in tax credits. The average value/cost column — remember that a figure above 1 is favourable — for 2023 explains why operators have been rushing to invest in renewable energy like wind and solar in recent years. It’s also part of why gas turbine orders have halved since 2015, to the detriment of GE Power and Siemens Energy.

A better way to consider matters would be to look at the figures without factoring in tax credits, not least because this gives a better approximation for the global situation. Here you can see that ratios are forecast to get better for renewable energy and surpass combined-cycle plants over the long term, even without tax credits.

The medium-term outlook for renewable energy is mixed

Based on the EIA base case projections, renewable energy will be more economically viable in the future even without tax credits — all of which point to a good demand environment for wind power. That’s a view backed by long-term demand projections at Vestas and GE Renewable Energy.

That said, investors need to be mindful that investing in renewable energy is a long-term play, not least because the medium-term outlook is mixed. For example, Vestas, GE, and Siemens Gamesa cite research from the Wood Mackenzie consultancy. 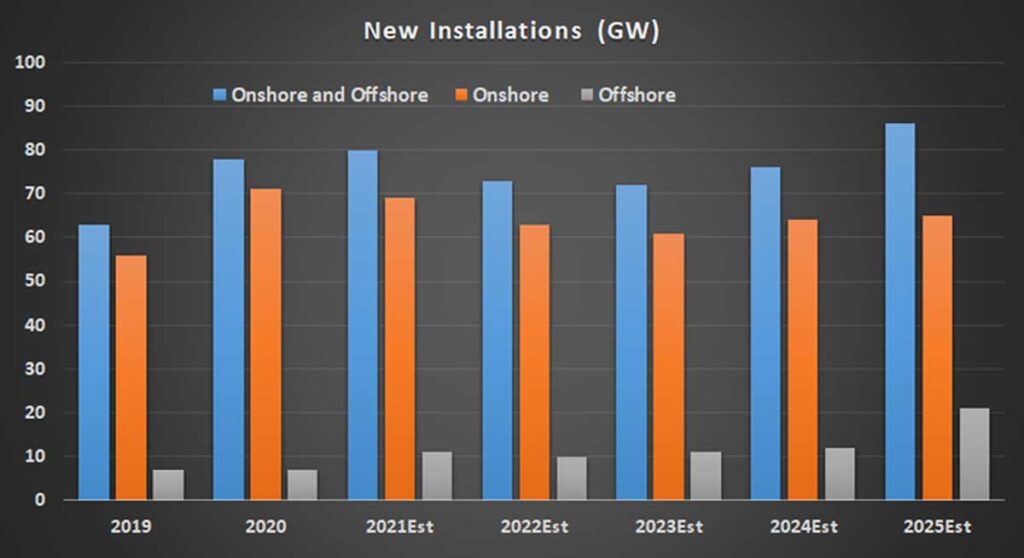 However, investors should prepare for the possibility of a slowdown in new installations over the medium term. Renewable energy has a bright future, but investors will need to be patient.

Why Are Oil Majors Investing In Offshore Wind? 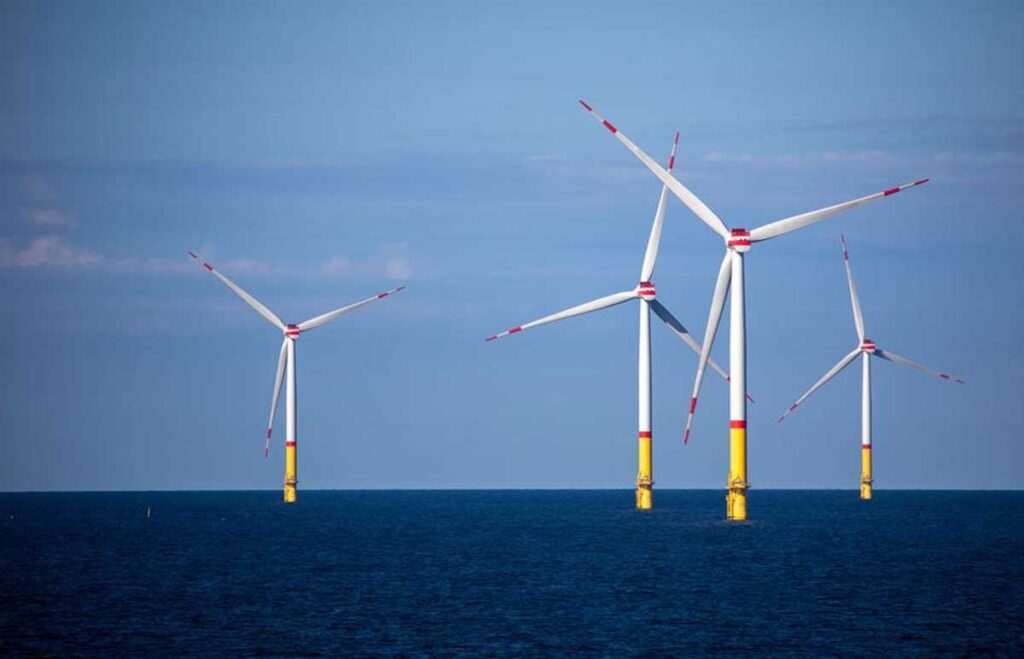 Offshore wind will play an important role in the Majors’ plans to transform against the backdrop of the global energy transition.

Some of the European Majors, such as Equinor and Shell, have been on that road for several years. However, other European major oil companies have recently adopted radical shifts in strategic direction that will transform them over the coming decades.

Why are oil Majors attracted to offshore wind?

It’s all about a change from big oil to big energy and expansion in renewable power, and offshore wind will be a huge part of that. Offshore wind is an obvious choice for the oil majors for several reasons.

Firstly, the offshore wind sector has large growth potential. We estimate that installed capacity in offshore wind will grow six-fold over the next decade to nearly 200 gigawatts (GW), and government targets are even higher than that. The ultimate potential of the sector is much bigger, and our figures indicate the total capacity of projects in the development pipeline is currently over 400 GW.

Secondly, there’s an obvious overlap with the oil Majors’ experience in managing and developing the operation of large offshore oil and gas projects. The Majors can use their supply chain power synergies with oil and gas operations and existing project management experience to create value.

Finally, offshore wind provides avenues for additional growth within emerging new energy technologies. Green hydrogen is the obvious one that everybody is talking about now, and the oil companies are already targeting this area.

How will oil Majors make the transition to offshore wind?

The Majors’ offshore wind portfolios are already some of the most geographically diverse in the sector. Portfolios are mostly early-life and the Majors now account for a significant proportion – 30% in 2020 – of sector capacity reaching final investment decisions. They will seek to gain a competitive advantage through operational and marketing synergies, geographical reach, partnership experience, financial muscle, and technology leadership.

Partnerships are a key feature of the Majors’ strategies, helping entry to new wind markets, facilitating operational knowledge transfer, and providing access to technologies such as floating wind. Equinor has the most in-house business development and operational experience and so has an advantage over its peers in this respect.

However, it’s worth noting that strategies will diverge as each company focuses on areas of competitive advantage. For example, Equinor is targeting leadership as a developer while Shell stands out as being most market oriented.

Where are the opportunities?

Most Majors are simultaneously building out solar and onshore wind, but offshore wind has a bigger project scale and higher capacity factors. According to Wood Mackenzie’s Corporate New Energy Series, annual spending on offshore wind by the Euro Majors before project financing will increase to around US$8 billion a year in 2025, which is more than 18 times 2020 spending levels. This is a game-changer for the development of offshore wind and illustrates the level of commitment from these companies. 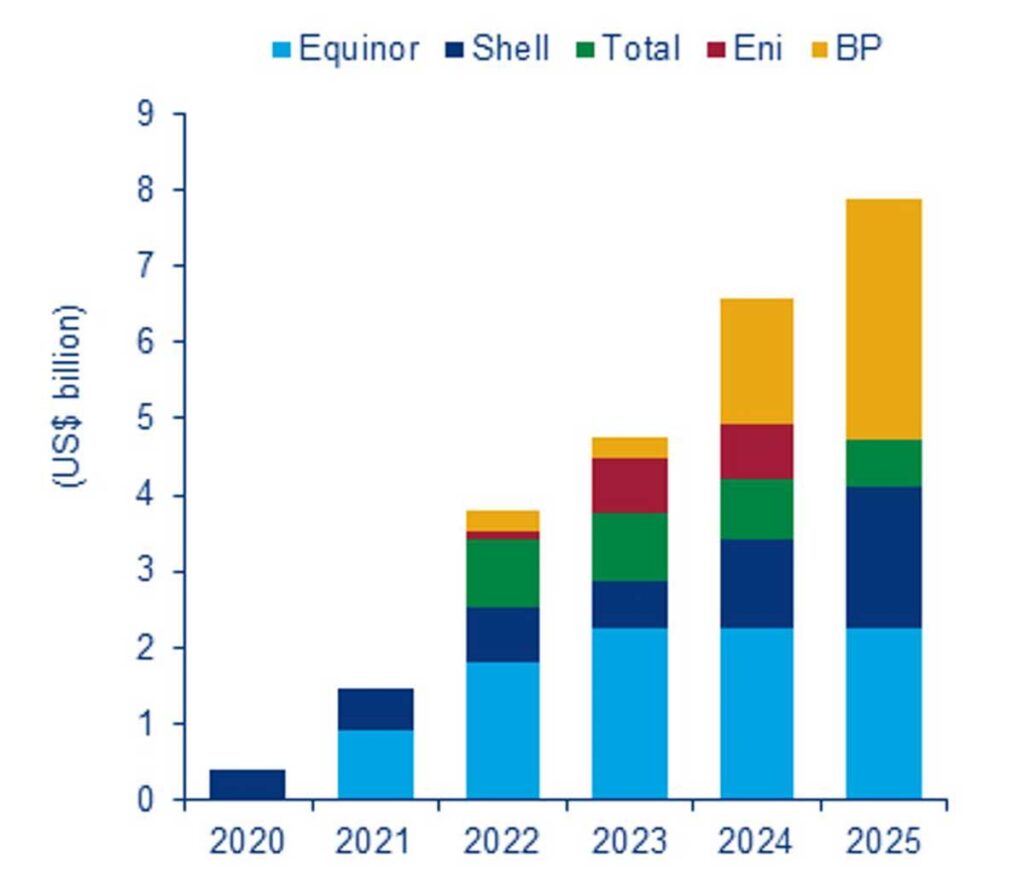 Equinor aims to be an “offshore wind Major” and is already the leading oil Major with net equity capacity of 12 GW, which is more than the rest put together. But the others are working hard to catch up, with BP and Total placing increasingly bigger bets on wind technologies. Shell is more customer focused and sees offshore wind as part of its integrated value chain that supplies low-carbon energy to its customers.

What does the future hold?

The Majors will be active participants in wind tenders scheduled for 2021. Lease and deal activity will increase as companies look to enhance and diversify portfolios, especially in new markets.

The race to expand floating wind solutions to commercial scale will also continue. Equinor has been active in floating wind for over 20 years and they will continue to invest in this area. Shell and Total will also look to get involved in projects that advance this technology. This could become an important source of growth for all three in the 2030s.

We are expecting to hear very shortly the announcement on the 2021 GIS (Government Inscribed Stock- Bonds) auction programme for 2021. If you would like to bid int the auction or would like more information on how to participate, please feel free to give me a call to discuss. There is no brokerage charged by JMP if you participate in the GIS auction. Please speak to us as to how you can set up a JMP Nominee account.

I hope you have enjoyed this weeks read and if you would like to discuss your investment options, please do not hesitate to contact us