This week we also saw BSP and KSL issue their annual Reports of which a copy can be emailed to you.

On the interest rate front we saw the short end remain steady with 364 day TBills auction trade at 7.20%. There has been no change to the Institutional 12 month depos at 5.50%

In the long end we saw a well bid Treasury Bond Auction, noting the issuance of more stock than on offer in the long end. This was a surprise to the market who had focused their books on the short end of the market to ensure excess liquidity was taken up.

The results were (yields are average based on volume and yield)

We may see another auction within the next few weeks.

The Tap Bond Market will reopen shortly and we will advise as to when BPNG will accept new deposits. If you would like any information on how to buy Bonds, please feel free to call and discuss.

Is the first country in the world to introduce legislation requiring banks, insurers and investment managers to report on the effects on their businesses on climate change.

The legislation is titled Financial Sector (Climate related Disclosure and Other Matters), and its stated purpose is: to ensure that the effects of climate change are routinely considered in business, investment, lending, and insurance underwriting decisions; to help reporting entities demonstrate better responsibility and foresight in their consideration of climate issues; and to lead to smarter, more efficient allocation of capital, and help smooth the transition to a more sustainable, low-emissions economy.

Under the legislation the reporting requirements apply to banks with more than NZ$ 1 billion (around USD 700 million) in assets and to insurers with more than NZ$ 1 billion of assets under management. It is expected that this legislative move in New Zealand will be followed at an increasing pace by other countries: committing to and projecting net-zero GHG emissions is one step, the ongoing monitoring and verification of GHG emissions arising is critical to ensuring that net-zero GHG emissions are in fact achieved, and transparency through reporting across the entire economies is required for this purpose.

Hydrogen Europe represents around 220 industry participants and 26 national associations. The H2A is best described as an outline of what is required to allow a hydrogen industry to develop and to be integrated into the EU economy and the infrastructure of the EU economy.

The H2A may be regarded as describing the next steps on the road to the development of the legal and regulatory framework that will allow the EU to implement its Hydrogen Strategy (A hydrogen strategy for a climate-natural Europe – July 8, 2020), critically during what Hydrogen Europe describes as the Ramp-up phase (2025 to 2035).

BlackRock and Temasek partner to decarbonize: BlackRock and Temasek, two of the world’s largest and most influential and respected investment houses, have announced the establishment of the Decarbonisation Partnership. The Decarbonisation Partnership contemplates an initial USD 600 million capital commitment to invest in companies and proven technologies that will reduce, and potentially eliminate, GHG emissions.

For decarbonisation solutions and technologies to transform our economy, they need to be scaled. To do that, they need patient, well-managed capital to support their vital goals.

This decarbonisation partnership will help define climate solutions as a standalone asset class that is both essential to our collective mission and an historic opportunity created by the net-zero transition.”

The bed rock of the Decarbonisation Partnership is an understanding that the world carbon budget requires the reduction of 1.7 billion tonnes of GHG emissions each year to achieve net-zero by 2050. As many countries and corporations have realised around the world, the move towards net-zero emissions offers opportunities for investors.

It has been a busy period for BlackRock. In addition to the Decarbonisation Partnership: on April 8, 2021 BlackRock is reported to have closed its third global renewable energy fund at USD 4.8 billion, Global Renewable Power Fund III, and on April 7, 2021 BlackRock is reported to have agreed terms for a USD 4.4 billion borrowing facility that provides lower borrowing costs if BlackRock achieves diversity targets and broader sustainable business goals. 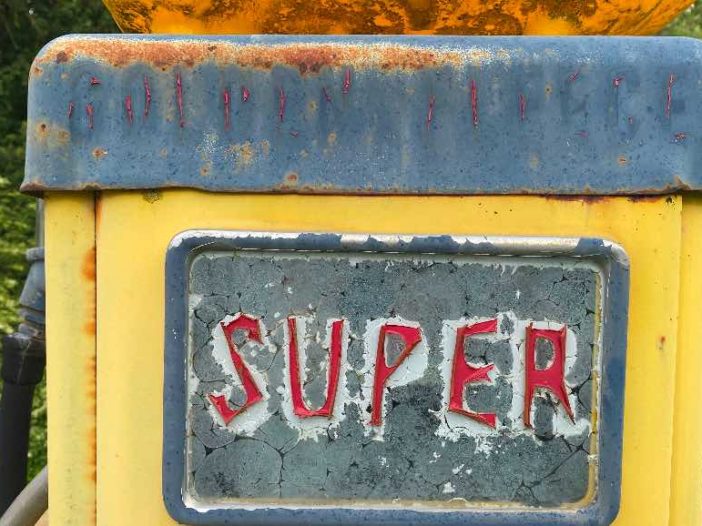 Federal and state governments are spending more than $10 billion a year propping up the fossil fuel industry, through a system of tax breaks and cash handouts that encourage the entrenched use of oil, gas and coal by Australian business, new research by the Australia Institute finds.

The biggest portion of that figure is the whopping $7.84 billion the federal government returns to business through its fuel tax credit scheme. That’s more than the $7.82 billion it put aside for the Army in the 2020-21 budget.

The progressive Canberra-based think tank, which is a vocal campaigner for aggressive climate action, found just over $1.5 billion of that $7.84 billion went on fuel used by the fossil fuel mining industry. In other words, it subsidised the fossil fuels used to help dig up more fossil fuels.

When the states and territories’ spending on fossil fuels is added to the tally, the fossil fuel industry will have received $10.3 billion of government support in the 2020-21 financial year.

While the term “fossil fuel subsidies” may conjure up images of government hand-outs to massive coal or gas companies, the research reveals a reality that is subtler but more entrenched. 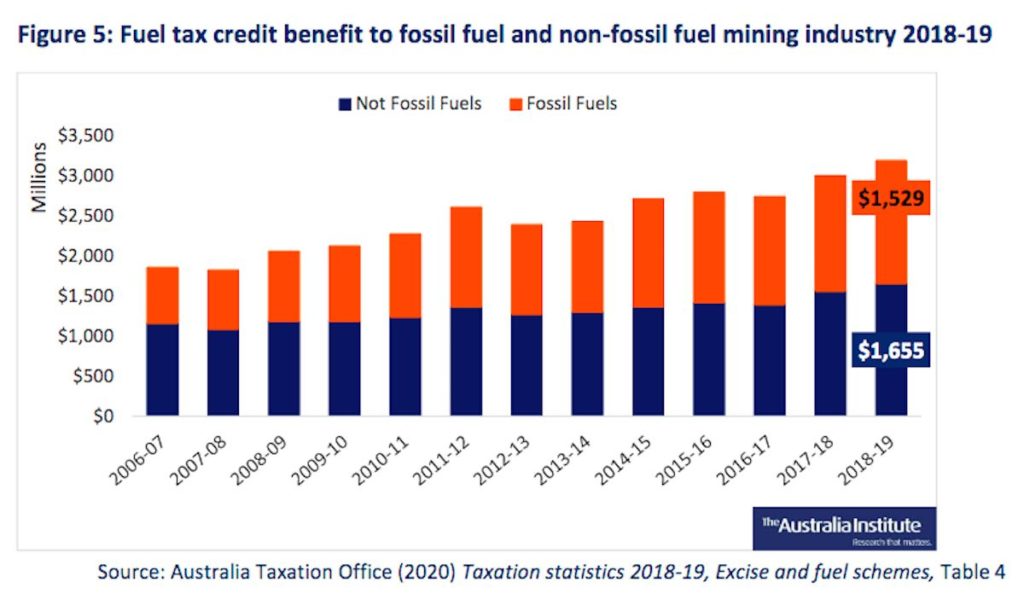 The fuel tax credit is a scheme that allows business to claim a tax credit on part or all of the fuel excise they pay on petrol, diesel, or liquefied natural gas – excluding that which is used in cars and other small vehicles that travel on public roads. It applies to small, medium and large businesses alike.

Fuel excise currently stands at 42.7 cents per litre of petrol and diesel, and 29.3 cents per kilogram of liquefied natural gas. The government credits the full amount on fuel that is used for purposes other than road transport, and a partial credit on fuel used in heavy road transport.

Fuel excise is vaguely regarded as a means of taxing road use, so there would appear to be some logic to refunding that tax when the fuel is used for purposes other than public road use.

But The Australia Institute said the link to road use was an illusion. It claimed fuel taxes were “not linked in any way to road funding, as is commonly suggested by recipients of this subsidy; they simply contribute to general revenue, like most other federal taxation”.

It argued this was tax revenue that could be allocated to any purpose – including low-carbon purposes. The decision to give it back to businesses substantially reduces the real cost of fuel, and it must therefore be regarded as a fossil fuel subsidy.

Other than the notoriously loose “safeguard mechanism”, Australia does not have any policies, market-based or otherwise, that discourage companies from emitting large amounts of CO2. Nor does it have any policies to encourage the take-up of electric or low-emissions vehicles.

The fuel tax credit scheme is the opposite of a carbon tax, and in the absence of any other checks on carbon, it is an unchecked policy that encourages fossil fuel use. It therefore would seem incompatible with the federal government’s mealy-mouthed insistence it plans to reduce emissions to net zero at some point this century. 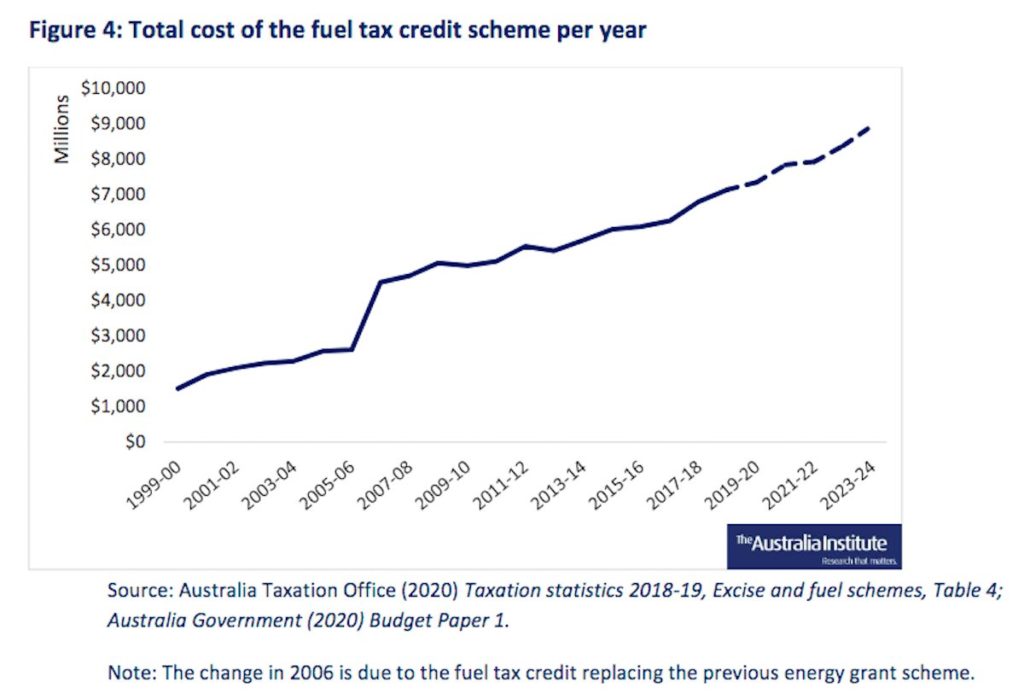 “From a climate perspective this is inexcusable and from an economic perspective it is irresponsible. The major subsidies are Commonwealth tax breaks that mean the largest users of fossil fuels get a refund worth $7.8 billion on a tax that the rest of the community has to pay.”

The Australia Institute defines a “fossil fuel subsidy” as any instance “where governments choose to allocate scarce resources to fossil fuel industries in a way that restricts use of those resources for other government priorities”.

Beyond the spending on fuel tax credit, The Australia Institute found the federal government spent more than $1 billion on tax concessions on aviation fuel and tax breaks and petroleum producers operating in Commonwealth waters. It also spent a further $266 million in direct investments.

The federal government has increasingly tried to marry fossil-fuel subsidies with supposedly “low carbon” technologies such as CCS and blue hydrogen (which makes hydrogen from fossil fuels and captures and stores the CO2 emissions using CCS), which will together receive more than half a billion of funding in the May budget.

The idea that either technology is low carbon is highly contested, given CCS technology is not able to capture anything like all of the emissions. Some supposedly “blue hydrogen” projects, such as the one in Victoria’s Latrobe Valley that is sponsored by both federal and Victorian governments, do not actually include CCS. 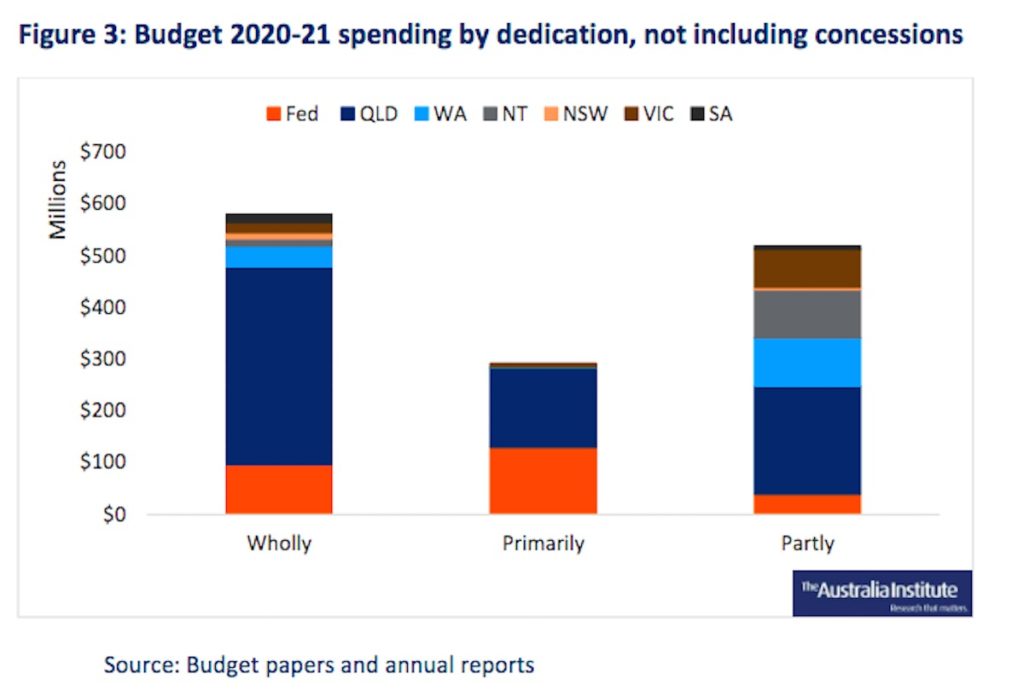 Of the states and territories, Queensland spent the most in fossil fuel subsidies – $744 million – mostly on its publicly-owned coal plants, coal mines and ports that export coal and import petroleum products. It is followed by Western Australia, which spent $135 million, and the Northern Territory, which spent $107 million.

If you would like to discuss any area of the report, please feel free to give me a call.

Have a great week,