On the interest rate front the short end of the yield curve was a little steadier this week with the 364 day TBill auction averaging 2.50%.

On Friday night we saw BPNG announce a GIS tender for this week with stock along the curve on offer. I expect the rates to be bid quite heavily again as the big end of town endeavours to put away their liquidity.

In the non-bank depo market, rates remain steady with FIFL rates as below;

And something a little different, and hasn’t this landscape changed since I have been including in this report;

While the Papua LNG and P’nyang gas projects are expected to more than double Papua New Guinea’s current gas production over the next decade, the country also has several smaller gas projects with potential.

One of these projects is just about ready to go.

A petroleum development licence (PDL10) for the Stanley gas field in the northern part of PNG’s Western Province was issued in 2014, but the project has mostly been on ice since, with previous developers Repsol and Horizon Oil finally divesting themselves of the project in 2020.

‘We have inherited a rather unique situation. Stanley has gone through a number of cycles and hasn’t come to fruition for various reasons,’ he tells Business Advantage PNG.

‘While the big-ticket item will be the offshore construction of the project’s gas plant, he expects there to be plenty of local content on the project.’

‘We have a small, experienced team. We’ve taken a simplified approach to the project. We know we can get it on stream.’

McGowan tells Business Advantage PNG that a final investment decision (FID) and financial closure on the project is now expected in August this year.

With Houston-based Azota Gas Processing pre-selected as the project’s engineering, procurement and construction (EPC) contractor, Stanley could be in production as early as January 2024.

The location of the project in Western Province (click to enlarge). Credit: Arran Energy The project will initially involve stripping liquid hydrocarbon condensate from the Stanley field using an on-site gas plant, and then re-injecting the majority of the project’s gas back into the ground, while using some of it for local power generation.

The condensate with then be trucked to the Fly River just below Kiunga, from where it will be shipped overseas.

‘Condensate is much more marketable,’ explains McGowan. ‘It sells like crude oil and its price is aligned with Brent Crude, whereas gas is more of a contract market and requires additional processes such as liquefaction.’

While oil prices are high currently, this hasn’t been the major motivation for moving towards FID. Oil prices, he observes, have shown themselves to be extremely volatile in recent years.

‘When we took this on, oil prices were quite low. Our task is to look at producing profitably with [per barrel] oil prices with a 4 in front of them. Right now, there’s a 10.’

He says simplifying the project has involved being less ambitious with production targets.

The Arran team is also committed to working with stakeholders and local communities to utilise as much Stanley gas as possible to support lower cost and lower emissions electrification in the Western Province.

The direct benefits of the Stanley project will include valuable revenue streams for national and provincial governments and landowners through landowner equity participation, taxes, royalty payments, levies, and through State and Provincial Government equity participation in the project.

McGowan says it will require capital expenditure of about US$110 million (K387 million) to develop Stanley into a productive field.

While the big-ticket item will be the offshore construction of the project’s gas plant, he expects there to be plenty of local content on the project.

‘At least 25 per cent of that is going to be local spend in the construction phase,’ he says.

Expressions of interest have recently been sent to PNG-based companies for the civil engineering and earthworks, and for the onsite installation of the plant at the Stanley well site.

Arran Energy currently owns 90 per cent of the Stanley project, with state-owned Kumul Petroleum Holdings Ltd holding the other ten per cent.

After FID, it’s anticipated Kumul Petroleum will increase its stake in the project on terms more favourable than those mandated in PNG’s Oil and Gas Act.

Arran Energy is also keen to ensure landowners have equity ownership in the project and is committed to ‘gifting’ a working interest to the landowners and Provincial Government.

If the Arran approach is successful, it is hoped that Stanley will provide a development template for its other gas interests in Western Province, previously considered ‘stranded’, such as the Ketu, Elevala, Puk Puk and Douglas fields.

‘These fields contain significant volumes of gas that ultimately need to be aggregated,’ says McGowan.

Thank you to Ainslie bullion for the following articles

Another night of deep red on Wall Street last night and another night of gold and silver price strength in the face of it.  Markets were rocked by the surprise rate hike of 50bps by the Swiss National Bank but more particularly the expected sell off of their mountain of US shares, particularly the ultra vulnerable FAANGs they’ve gone heavy on. The NASDAQ ended the session down 4.1%.  But it wasn’t the Swiss alone. More broadly we are seeing a set up mirroring the huge gold rallies of the 70’s and 2000’s.

Last night’s session was also rocked by more evidence of an impending recession combined with higher rates. Stagflation.  Both housing starts and permits plunged amid the strongest mortgage rate rises since 1987 (down 14.4% and 7% respectively against expectations of 1.8% and 2.5%! – are you listening Aussies?), US initial jobless claims rose again and now back to levels seen at the beginning of the year, and the Philadelphia Fed Business Outlook fell into contraction territory for the first time since COVID lockdowns commenced in 2020 and more importantly the 6 month outlook into contraction (-6.8%) for the first time since the GFC. As we discussed yesterday a recession is looking likely.

All of this, not surprisingly… was a surprise! Indeed the Bloomberg Economic Surprise Index just printed its lowest since July 2019 deep into COVID lockdowns and fallout. 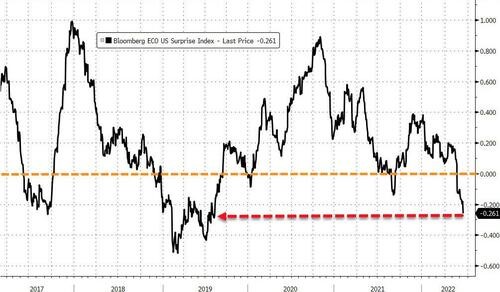 Going back to the Philly Fed print last night, Macro Insiders’ Raoul Pal rightly points out that every time previously this has happened the Fed has reversed course and loosened to save the day.  However they are now too publicly committed, too trapped to contain inflation after acting too slowly, that they simply cannot ease off now and look certain to drive the US into recession and cause contagion globally on that and a stronger USD smashing all those USD debtors. If they capitulate and ease, back up the truck for crypto and gold. 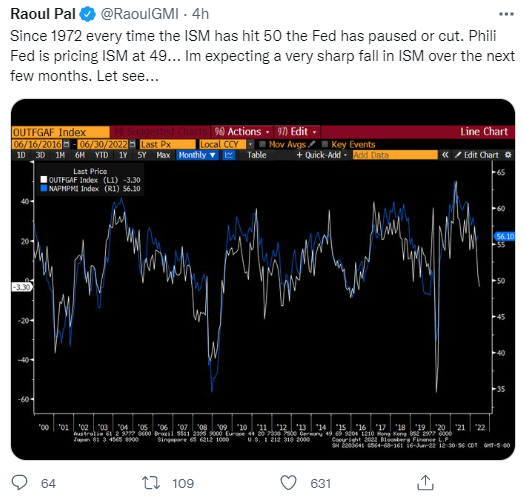 But let’s assume they keep on tightening. We keep reminding you that this stagflation setup, not seen since the 70’s, is historically uber bullish for gold.  The chart below maps this very clearly when you see the S&P500 adjusted for inflation and the inflection point we are now at or nearing, starting a monster rally in gold just as we saw in the 1970’s and just as we saw in the 2000’s.  We have only seen such a signal like this in the 2000’s, 1970’s and Great Depression.

JAPAN on the PRECIPICE

The Japanese yen is down to 135 yen to the dollar from 127 earlier this month as the Yen is starting to crack. Against the US dollar, this is the weakest yen in 24 years. The Japanese central bank issued currency tumbled along with Japanese bonds and their stock market yesterday. This flies in the face of Kuroda’s usual talking points that a weaker Yen is good for the overall economy and stocks.

On Monday, a poll conducted by Kyodo News revealed rising discontent with 64.1% of respondents seeing the response to rising prices of food and other daily necessities as inadequate. A separate poll found that 77.3% of Japanese have had their daily lives affected by higher cost of living pressures and 71% said they’d take those costs into account when next voting. In response, BoJ Governor Kuroda asked consumers to become more “tolerant” of price hikes. He quickly retracted the statement but the damage appears to be done with now increasing calls for a new Governor to be elected in the coming months. A majority of public respondents (59%) see Kuroda as unfit to stay at the helm of the Japanese Central Bank.

The Bank of Japan (BoJ) announced in April that it had an unlimited bid for the 10-yr JGB (Japanese Government Bonds) at 0.25%. Their grip appeared to loosen yesterday as rates spiked to 0.31%. This was the highest rate on the 10 year since early 2016. Daiwa Securities chief market economist, Mari Iwashita, stated “The BOJ will now need to explain clearly what is the logic behind the 0.25% cap and whether that level is appropriate under the current environment”. The Bank of Japan may be able to maintain the yield curve, but they are increasingly sacrificing the purchasing power of the Asian power in the process.

BoJ Governor Haruhiko Kuroda has responded to the break out of the upper rate bound with an announcement of bond purchases worth 500 billion yen (US$3.71bn) to hold the rate in place. One wonders how high rates would jump if they weren’t being controlled by artificial fiat creation.

They are far from the first country to engage in yield curve control. Australia’s RBA higher bound limit of 0.125% on our 10 year bonds broke in late October of 2021. 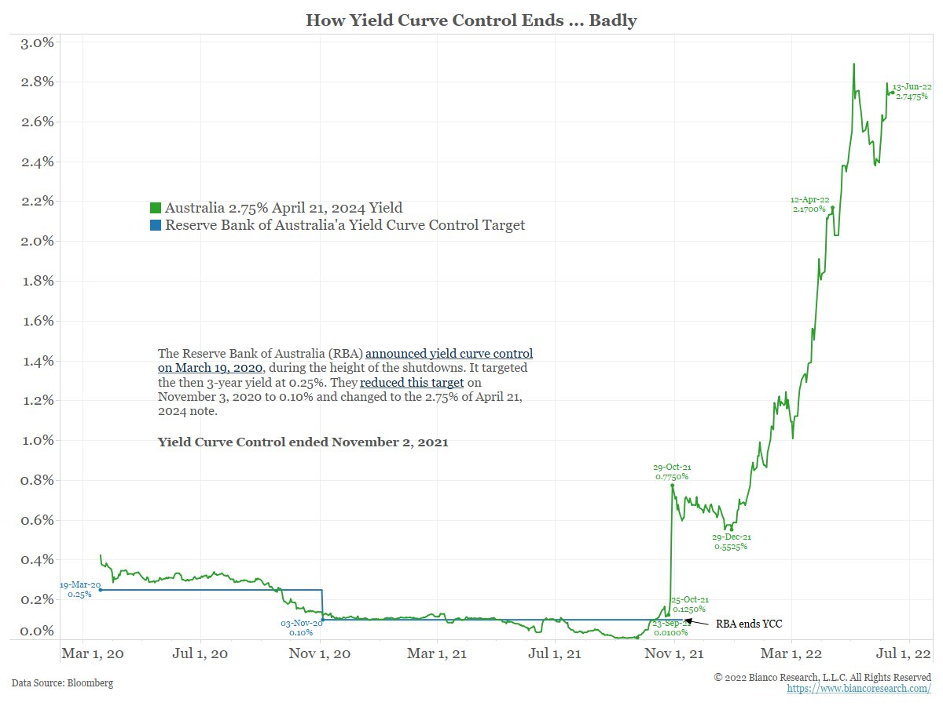 In other news, European bonds are also spiking. The following chart shows the 10 year debt of Italy, Portugal, Spain, Ireland, France and Germany in 2022. As a reminder, rates going up show that investors perceive greater risk of default/devaluation and as a result need more return to justify the risk in lending. Incidentally, the primary buyers of most European bonds is the ECB. A bit like the left hand lending to the right hand. 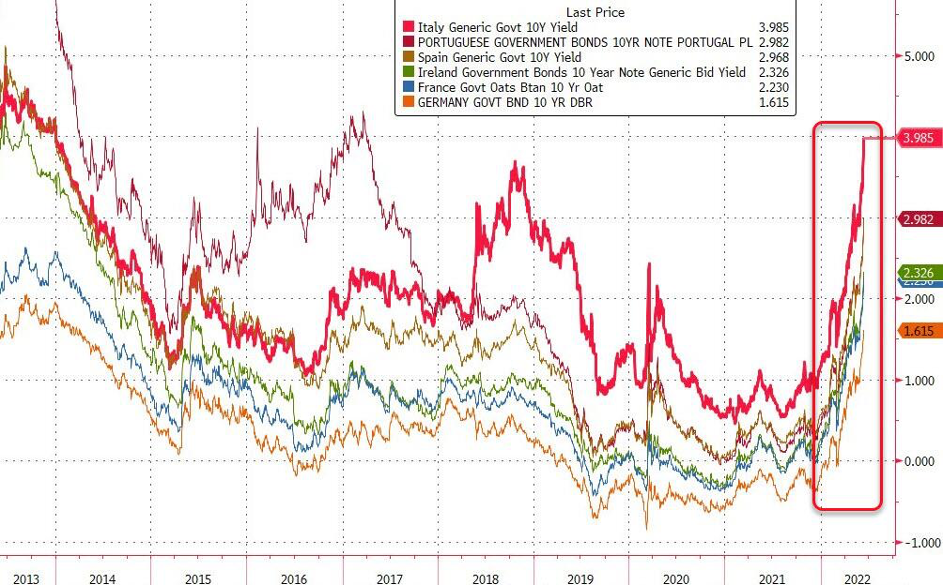 As countries that have engaged in zero-interest rate policies (ZIRP) and even NIRP, QE and even purchasing stocks as Japan has, the Modern Monetary Theory endgame appears to be rapidly coming to a head.

Citizens across the globe are seeing the purchasing power of their salaries and savings evaporate as goods and services are limited. Fiat currencies are centrally controlled, gold and silver are stores of value outside of government control

I hope you have enjoyed this week’s read. If you would like to contact me regarding your investment journey, please do not hesitate to reach out.